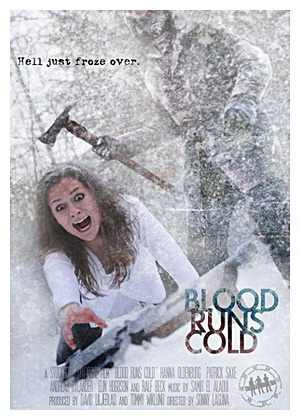 When recording artist Winona (cute Hanna Oldenburg) needs a getaway, her manager books her a large secluded house near her hometown. Hanna hooks up with her ex-boyfriend and some of his pals at a bar and they return to the house to party. But in the hidden crawlspaces and rooms in the home lurks a killer, who soon starts to thin the group’s numbers and quite gruesomely.

Swedish horror is an odd slasher as directed by Sonny Laguna and co-written by he, David Liljeblad and Tommy Wiklund. There is literally no backstory on the creepy killer, not even the traditional local legend and he even seems to be some sort of zombie as he bleeds dust and eats his victims. The film has some very good and abundant gore as a result, but we are still left a bit cold as we never know who or what exactly Winona is dealing with. The film also is light on suspense and only whips up some tension when Winona is left for final girl duty and battles her attacker within the hidden walls, rooms and tunnels of the house. There are definitely some questions raised here by some very obvious plot holes. Why has no one heard of this killer, or resulting disappearances, as he seems to have been in this house for some time? As the killer seems to remain in and around the house, why doesn’t Hanna simply run for it when given the chance, she didn’t seem that far from town. Does Hanna not know blood when she sees it in large puddles? And where the hell did that fully loaded machine gun come from? The film may also get the award for most gratuitous nose drool in film history. Suffice to say, this is not the most solidly scripted slasher and a bit too much is left to our imaginations. It does deliver some really well-done gore, there is some nice nudity from Hanna Oldenburg and Elin Hugoson and Oldenburg does show some spunk as our heroine and is not the virginal type usually given final girl duty. The rest of the cast are generic and unremarkable with the killer himself looking creepy and is effective, despite no backstory or exposition. The snowy scenery also worked in the film’s favor and the house setting was fairly spooky. The film is also less than 80 minutes, so is economically short, which works in it’s favor.

This flick certainly was a mixed bag. There was plenty of gore, a creepy killer and a cute and feisty final girl in Hanna Oldenburg. On the other hand, the rest of the cast was bland, the script underdeveloped and some crucial plot points were left unaddressed. Director Laguna delivered very little tension or suspense and the atmosphere the film had was provided by the snowy Swedish locations and the spooky old house it was filmed it. Passed the time inoffensively, but nothing remarkable or memorable about it. Nice effort on certain levels considering a reported budget of only about $5,000.

A generous 2 and 1/2 pick axes, mostly for the gore, locations and cute heroine.