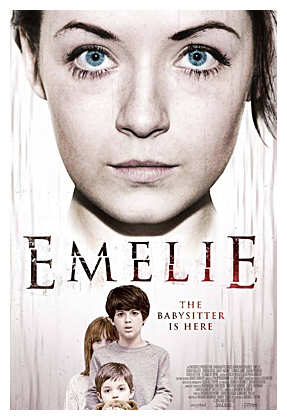 Babysitter from hell flick opens with a young girl being kidnaped, so we know from the first frames that something is wrong and it sets the mood. When the Thompson family’s regular babysitter Maggie (Elizabeth Jayne) can’t make it, the couple (Susan Pourfar and Chris Beetem) chooses a girl named Anna to watch over their three kids during their anniversary dinner date. But ‘Anna’ is actually Emelie (Sarah Bolger), who not only encourages the kids to misbehave, but does disturbing things like putting on their parents sex tape for the kids to watch and feeding little Sally’s (Carly Adams) hamster to older brother Jacob’s (Joshua Rush) pet snake. As Jacob realizes the new sitter has a few screws loose, he must find a way to protect Sally and youngest sibling Christopher (Thomas Bair) from her increasingly dangerous behavior. But Emelie has a far more sinister agenda and no one, not even Jacob’s parents, might be safe.

Directed by Michael Thelin, with a script from Richard Raymond and Harry Herbeck, the film is nothing new, but still very effective as it puts some likable kids in the path of a very disturbed young woman. It also isn’t afraid to break boundaries on a creepiness level by having Emelie not only show underaged kids a sex tape of their own parents, but giving the coming of age Jacob a first glimpse of lady parts. Obviously the deranged young woman has no problem putting little kids in harm’s way, or killing to get what she wants…and what she ultimately wants is a bit chilling once revealed. This isn’t a new story, but the filmmakers do make it work, especially when Jacob locks into protective older sibling mode and goes on the offensive against Emelie. It’s suspenseful and fun to watch the tween take on the psycho sitter and while it’s outcome may not be unexpected, we still cheer for him as he turns the tables on the pretty predator. The pacing is a bit more moderate here, but that serves the story as Emelie’s behavior slowly evolves from rebellious to scary and the kids realize the fun new babysitter is someone to be feared. There is also some violence and bloodshed which, while not unexpected, is used sparingly and effectively. Thelin knows how to generate tension and suspense and that helps make a familiar story work and work well and the script, in a clever way, gives us enough information about Emelie to understand how she got this way. This gives her a little backstory, so she has a bit of depth and isn’t just a random psycho without a purpose.

The cast is first rate. Sarah Bolger is very convincing as first, the girl-next-door babysitter, than full blown psychopath when her true nature is revealed. For a petite young woman she can be very intimidating and scary, especially towards the kids. Joshua Rush is really good as Jacob. He gets to play a wide range here as first he pretends to be dismissive of the new sitter…then when she teases, he reacts with budding and clumsy sexual attraction…then fear when she goes all Joan Crawford…and finally courage when comes time to fight back. Good work from the young actor. Carly Adams also is cute and likable, so we feel bad for her when things get ugly and little Thomas Blair is a typical hyperactive four-year-old and we also care when he is put in jeopardy. The kids are all good and avoided annoying kid syndrome. Susan Pourfar and Chris Beetem are effective as the unsuspecting parents and Elizabeth Jayne is courageous and feisty when original babysitter Maggie comes to check on the kids and visit ‘Anna’. Also stars Randi Langdon as the real Anna who, obviously, has little to do.

Overall, this thriller worked despite the familiarity of the story. The filmmakers made the most of the premise and weren’t afraid to put the kids in some disturbing and uncomfortable situations, as well as, physical danger. The cast are all good in their parts, both young and adult, with Bolger and Rush standing out strongly as psycho-sitter and protective sibling respectively. Another example of filmmakers taking a familiar scenario and making it work effectively. Not a classic but got the job done.