Awful and annoying flick opens with a quick kill and then settles in for over an hour of a gathering of the most superficial, rich, spoiled mean-spirited, twelve year-olds you’d ever not want to meet. After watching them say horrible things to each other and try on clothes, the killer finally shows up with twenty minutes left to the film. At this point we want them all dead anyway and the killer is exactly who you figured it is. All the fancy emoji animation and cellphone clips just cement the notion that writer/director Tara Subkoff is not nearly as clever here as she thinks she is and her efforts to be hip fall flat. Some nice shot framing and cinematography, but otherwise completely forgettable. Somehow features names like Chloë Sevigny and Timothy Hutton as equally vapid parents.

Written and directed by Sonny Malhi, this supernatural thriller starts out interesting and a bit spooky. The story finds emotionally troubled teen Jess (Ryan Simpkins) moving into a new home and starting to experience strange visions and sensations. Her mother (Annika Marks) thinks it’s part of her Dissociative Identity Disorder, but soon they realized she is being haunted by a young girl, Lucinda (Amberley Gridley) who recently died in an accident.

Flick starts out effectively, then looses it’s grip somewhat when it becomes an outright possession flick. There are also scenes set in the hereafter where Jess’ consciousness and Lucinda’s spirit confer, that just don’t grab like they should. Lucinda’s mother (Karina Logue) also just happens to have experience, from living in India, about people who can channel the spirits of others and thus conveniently provides the exposition needed. It’s a plot contrivance that really sticks out. At least the film gets credit for focusing on a non-malevolent spirit possession this time and a host almost willing to let her inhabit her. Not a bad flick, but also one that isn’t completely successful either. 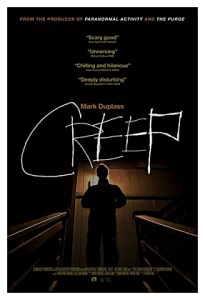 Creep is another flick that has a good idea and starts out effectively, but looses you in it’s last act. The story finds struggling videographer Aaron (Patrick Brice who also directed and co-wrote) accepting a job filming a man, Josef (Mark Duplass who also co-wrote with Brice) with terminal cancer at a remote cabin. The goal is for Josef to say goodbye to the unborn child he won’t live to see. As the session goes on through the day, however, Josef’s behavior gets increasingly bizarre and Aaron goes from uncomfortable to downright scared as things start to spiral out of control.

For the first two acts, this flick worked. Duplass was appropriately creepy and the remote cabin setting gave the flick the proper feeling of isolation. It’s when we leave that setting in the last act and Aaron returns home to continue to be stalked by Josef that the film looses it’s grip. It becomes a routine stalking flick that gets increasingly silly as it goes along until it reaches it’s predictable climax. The found footage format works, as usual, until we realize someone should be putting the camera down and running. Worth a look as it is effective for it’s first two thirds and the performance by Duplass really does make you uncomfortable. Too bad they couldn’t find a more interesting and intense way to end it.