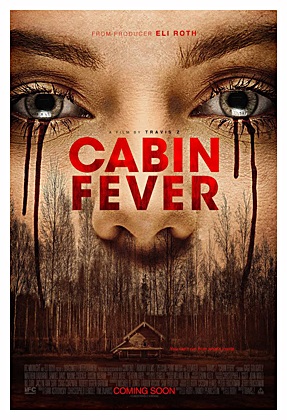 I’m not the biggest fan of Eli Roth’s original Cabin Fever. The combination of horror elements and really goofy humor didn’t mix well, killing any tension it tried to build and the homages to his influences were way too obvious and intrusive. It still managed to be moderately entertaining and at it’s core was a good idea.

This might be one of the most pointless remakes in the current trend, not only using the original’s script, but dumbing it down even further. So, yet again we have five twenty-somethings going to a remote cabin and contracting some kind of flesh eating virus from a weird homeless guy living in the woods. Panic and paranoia set in and so do stupid antics by our main characters.

Roth’s script is adjusted a bit, for the worse, by Randy Pearlstine and directed lifelessly by someone named Travis Z. It becomes just a series of dumb behavior by the characters who do the stupidest possible things during this viral outbreak. Having sex, despite being supposedly terrified of contracting it and constantly putting themselves in the proximity of blood from the infected, are just a few of the moronic things these folks do. The scene where the homeless guy gets set on fire by the five dumb-asses is so clumsily staged, that you can’t believe what you just saw. Is this a student film? Note to stupid yuppies…don’t lament setting a guy on fire when you doused him with lighter fluid to begin with, that’s kinda what happens. Yes, the film is filled with that kind of blatant stupidity that the only person you feel bad for is the first contractee Karen (Gage Golightly), mostly because she shares your contempt for the rest of them. You are almost rooting for this bunch to melt away, they are such unlikable idiots. And don’t get me started on the gun that only fires when convenient. Travis Z’s attempts at Roth-like humor also fail miserably, though they are thankfully few and far between and the gore isn’t any more inventive than it was last time around. At least I did like Kevin Riepl’s score.

Awful movie, a complete waste of time and one of the most pointless remakes ever made…and Roth produced it! Also stars Alexandra Daddario’s brother Matthew, Samuel Davis, Dustin Ingram and Nadine Crocker as the other four ill-fated morons.

1 and 1/2 pancakes cause even that stupid bit is recycled.

One thought on “HORROR YOU MIGHT HAVE MISSED: CABIN FEVER (2016)”