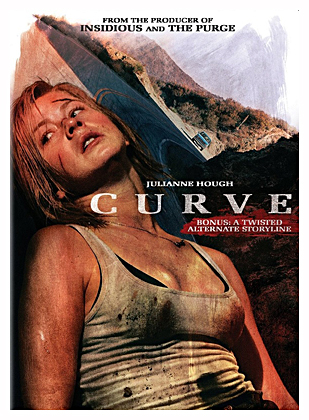 Curve is one of those movies that is nothing new story wise, but presents it’s yarn in an entertaining manner and has the benefit of a fiery leading lady to keep our attention and carry the flick. Tale of survival has pretty Mallory (Julianne Hough) driving from California to Denver for her wedding. She is having second thoughts and takes the scenic route…first bad idea. She breaks down and is helped by handsome stranger, Christian (Teddy Sears) and in return for his aid, offers him a ride…second bad idea. He, of course, turns out to be a looney and in an attempt to rid herself of the seatbelt-less psychopath, she crashes the Bronco she’s in…third bad idea. Her plan backfires and now she’s at the bottom of a ravine, pinned inside the vehicle and left not only to brave the elements, but Christian, who survived and is lurking about outside, taunting her.

The story is far from fresh, as per the script by Kimberly Lofstrom Johnson and Lee Patteson, and the plot does move along by the protagonist making some classically bad decisions. But, it is well directed by Iain Softley and it overcomes it’s familiarity to be considerably entertaining as a result. Softley also gets a good performance out of Hough who proves to be quite a resourceful and gutsy heroine for us to root for…and so, we cut her some slack for making some cliché movie missteps that get her into this mess. The best parts are the sequences of Mallory battling the elements and cleverly keeping herself alive against the chill of night, hunger and a stalking psychopath…all the while she’s stuck upside-down in the overturned Bronco. If there is a weak spot to these scenes it’s that Teddy Sears’ nut-job is of the generic kind and the actor really doesn’t give Christian the intense menace he needed to truly make him scary. He isn’t bad, but is basically upstaged by ants, rats and a rising flood in the threat department. Despite the need for a stronger villain, we still enjoy the final confrontation between he and his resilient ‘victim’ when she tracks him to a cabin where he has been tormenting it’s occupants. It is satisfying despite being familiar and cliché…again because it’s well directed and Hough makes a good final girl.

Overall this is an entertaining flick. It overcomes a routine story, some extremely familiar movie character mistakes and a generic bad guy, to be a fun diversion. It has solid direction by Iain Softley and a strong and resourceful heroine from Julianne Hough, who I’d like to see do more final girl work. An engaging enough thriller for an evening on the couch.