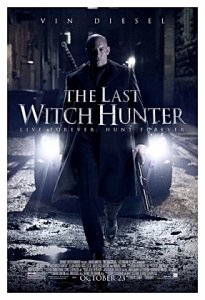 Flick opens in the Middle Ages where witch hunter Kaulder (Vin Diesel) has hunted down the Witch Queen (Julie Engelbrecht) who has unleashed a plague and slaughtered Kaulder’s family. Before she is slain, she curses him with immortality so he may forever feel the loss of his loved ones. We then move forward to modern day where Kaulder works for the Axe and Cross, a church run organization which polices the witch population. All is well till an old enemy turns out not to be dead and seeks to exact a horrible revenge on Kaulder and the rest of the world.

Tedious and silly flick is directed very by-the-numbers by Breck Eisner from a barely coherent script by Matt Sazama, Burk Sharpless and Cory Goodman. While the FX are decent and there is plenty of action, the plot is a completely nonsensical mess and even star Diesel does not seem like he wants to be there. There is no energy or urgency to any of the proceedings and it’s all rather dull and lifeless despite the heavy fantasy and action elements. It almost seems like no one involved really wanted to make this movie…or write it for that matter…as it has no heart or soul and all the performers are at paycheck level. Also stars Game Of Throne’s Rose Leslie, Lord Of The Rings’ Elijah Wood and the incomparable Michael Caine somehow got dragged into this forgettable mess as Kaulder’s handler, Dolan.