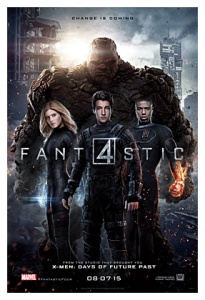 Finally caught up to this much maligned reboot and have to say that I don’t quite understand all the hate it gets. Maybe it’s because I didn’t follow the comic and am not familiar with the lore, or that I just went in with such low expectations that I was pleasantly surprised when it wasn’t altogether awful.

The story follows the creation of a teleportation device by nerds Sue Storm, Reed Richards and Victor Von Doom (Kate Mara, Miles Teller and Toby Kebbell) along with Reed’s friend Ben Grimm (Jamie Bell) and Sue’s hotshot brother Johnny (Michael B. Jordan). The device opens a portal to another world and when an unsanctioned trip to that world goes awry, all five are graced with drastic changes that give them unique powers. While the four returning try to cope with their new ‘gifts’ and the government tries to decide what to do with them, Victor is stranded on the alien world gaining frightening power and a heinous agenda.

Josh Trank’s interpretation is, by far, not a misunderstood classic, but it is a unique take on the superhero genre, much like his Chronicle, focusing more on how one might react to gaining unwanted abilities and how they would be viewed by paranoid and power-hungry government agencies. The fact that two of the four become outright government agents to use their powers for ‘good’ is amusing and we know that eventually some kind of threat, here Victor Von Doom, will unite them as heroes. It’s actually an interesting and non-traditional viewpoint of the superhero epic and there is little or no action till the end…which is where it really stumbles. The conflict with Doom is basically in the last 20 minutes and his reasons for wanting to literally destroy the Earth are quite convoluted. We also never get a real grasp as to what it is about the forces on this planet that imbue superpowers upon it’s visitors. The battle between the newly formed superhero group and “Dr. Doom” ends rather quickly and with little effort, leaving the film with a very anti-climactic feel by the time the credits roll. It all seems more like a 100 minute origin story than a complete movie, though had it not bombed, it might have been interesting to see these four on a complete adventure. Oh, well. Cast were all fine though some of the CGI FX range from excellent to mediocre. Underwhelming…yes…completely awful…not really.