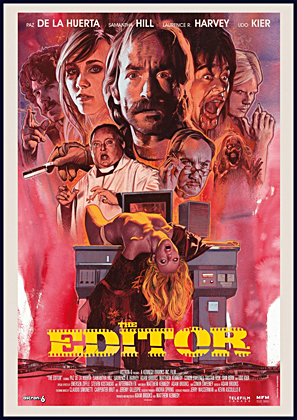 Flick from writer/directors Matthew Kennedy and Adam Brooks is a tribute to the italian horror/Giallo films of Dario Argento and Lucio Fulci that succeeds in certain areas, but fails in others. The film tells the story of legendary film editor, Rey Cisco (also Adam Brooks) who is currently working on a bloody murder mystery film, when he becomes embroiled in one in real life. The case is being investigated by hot shot detective Peter Porfiry, (also Matthew Kennedy) who thinks Rey is the prime suspect.

The film, co-written with co-star Conor Sweeney, creates the look and feel of the Italian chillers of the 70s and early 80s excellently, with some dead-on camera angles, shots and lighting, along with a perfectly fitting electronic score. There is also a bevy of lovely ladies with very generous amounts of nudity and excessive gore. Where the film goes wrong is that not only is it tedious and dull, with it’s gimmick wearing out it’s welcome early, but it also is played for laughs where a straightforward recreation probably would have been far more entertaining. The homages to Argento, Bava and Fulci are certainly well intended…thought there are also nods to Cronenberg’s Videodrome and Nakata’s Ringu that seem a bit out of place…but as a movie in itself it’s gets boring after the first half hour with the story awkwardly changing focus from Rey to Detective Porfiry and losing it’s grip. Too bad, the flicks heart is definitely in the right place.

Overall, while the tribute is certainly heartfelt and Kennedy and Brooks know their subjects well, the film they have created from that admiration fails to entertain like it’s influences. Also stars Nurse 3D‘s Paz de la Huerta, American Mary‘s Tristan Risk and the legendary Udo Kier.