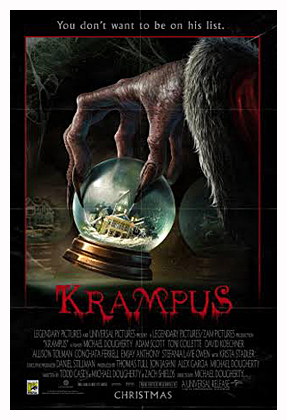 Michael Dougherty’s Trick ‘R Treat became an almost instant classic once the flick was discovered on DVD and now he is finally back in the director’s chair with Krampus, a dark comic fantasy based on European folklore. The legendary Krampus is a demonic creature that serves as an anti-Santa Claus, who comes to punish the naughty at Christmas time…at least according to parts of Western Europe.

This tale finds young Max (Emjay Anthony) becoming increasingly disappointed with his family and their completely dysfunctional treatment of Christmas, which Max still believes in. His spirit is broken when his redneck cousins push him to the edge when mockingly reading his letter to Santa out loud at an already spoiled pre-Christmas dinner. He shreds his letter and casts it angrily out the window denouncing Christmas and any hope of having a happy one. This evokes a massive snowstorm and power outage and at it’s core lurks the creature of legend Krampus, along with his demonic elves and minions, who soon, one-by-one, start taking the members of this holiday-challenged family to a very un-merry fate.

Krampus is not quite the devious and twisted fun that Trick ‘R Treat was, at least not until all hell breaks loose in it’s last act. As co-written with Zach Shields and Todd Casey, Dougherty goes for something with a little more mainstream accessibility and thus with less of an edge than his Halloween classic. The PG-13 movie is a bit more family friendly film, but certainly does have it’s dark, wicked moments and satirical…though cliché…jabs at what Christmas has become in modern times. No better is this illustrated than in it’s opening credits sequence set at a mall. There are some suspenseful moments, but the film don’t quite have the constant atmosphere of ghoulish fun that graced Trick ‘R Treat. The earlier scenes of family chaos are a tad flat and presented the cliché ‘yuppies vs white trash’ scenario seen so many times before. On the plus side, Dougherty’s sumptuous visual style dazzles and chills with his snow-covered vista’s and the dark shadows that dance in fireplace lit rooms. His creatures are all twisted, evil versions of classic Christmas toys and characters, including the title monster himself. That and a splendid animated flashback about halfway through…the best segment in the film…evokes elements of Tim Burton when he was at the top of his game. The FX of this modestly budget film are all top notch and exquisitely designed though, I was not quite as impressed by Krampus himself as I should have been. He looks cool, but doesn’t have much more impact than some of his minions, such as the kid devouring jack-in-the-box or vicious ginger bread men, which evoked nervous giggles from the audience. Adding to some of the film’s atmospheric moments is Trick ‘R Treat composer Douglas Pipes’ effective score, aided by Jules O’Loughlin’s lush and spooky cinematography. Dougherty succeeds here more than he slips and overall this is a fun movie if not totally living up to his previous fan favorite.

The cast was a mixed bag for me. I am not a fan of Adam Scott, who I find very bland and he was so here as dad, Tom. Toni Collette is wasted in a very stereotypical suburban mom role, as Sarah, that gives this gifted actress very little to do except grimace at her redneck relatives and look worried/scared. Young Emjay Anthony fares much better as the sensitive and disillusioned Max, though the story has him take a back seat to the more bland Scott and David Koechner, who plays gung-ho brother-in law Howard. Stefania LaVie Owen showed some moxie as Max’s sister Beth, but the script has her disappear in the first act and Krista Stadler was good as Tom’s European mother “Omi” who provides old-world charm and the Krampus exposition we and the film’s characters need. The rest…including hard working character actress Conchata Ferrell…all play cliché white trash members of Sarah’s sister Linda’s (Allison Tolman) family and they are stereotypes we’ve all seen before.

I liked Krampus and more worked for me than didn’t. I did wish it had a bit more of an edge and that things were a little livelier in it’s more sedate, cliché and sometimes flat, beginning. The second half of the film really delivers what we came for, especially the last act and makes up for it’s weaker parts, though I wish the film kept it’s focus on Max instead of turning it over to the blander adults. The film looks gorgeous and the spooky visuals, creature designs and animated flashback reminded me of Tim Burton at his finest. Not quite the instant classic that Trick ‘R Treat was, but a film that certainly entertains, overall and may grow on one even more, upon repeat holiday viewings. Flawed but still recommended.