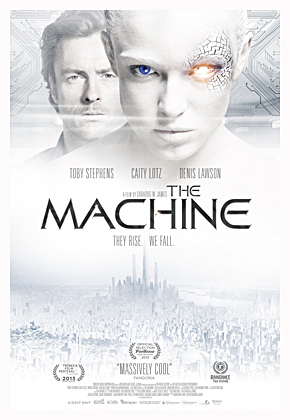 Stories of artificial intelligence becoming self-aware have been told over and over from 2001: A Space Odyssey to Colosus: The Forbin Project to The Terminator and this year’s Avengers: Age Of Ultron. There’s something chilling about an advanced machine thinking on it’s own and deciding we are obsolete…and it works more often than not. Caradog W. James’ British Sci-Fi chiller, The Machine is no different.

Story is set in the near future where war with China is looming. Enter Dr. Vincent McCarthy (Toby Stephens) who is not only developing a fully robotic being with it’s own artificial intelligence, but implants that restore lost brain function to injured veterans and cybernetic replacements for lost limbs. While the Dept. Of Defense’s goal is to have an army of robotic fighting machines ready for when full war breaks out, McCarthy’s personal goal is to use his A.I. tech to save his daughter from a rare brain disorder. He uses the brain waves of his pretty new assistant Ava (Caity Lotz) to build the A.I. for his first fully robotic entity and when the inquisative Ava is suspiciously murdered, McCarthy makes the robot in her image. Government bureaucrat, Thompson (Denis Lawson) has more lethal plans for “Machine” (also Lotz) and as she is secretly turned into a fighting soldier, Machine’s more benign programing conflicts with her training and the self-aware automaton decides maybe it’s time robot and cybernetic veteran alike, took control from the corrupt humans.

Despite it’s familiar story, writer/director Caradog W. James makes it work by giving it…and his ‘Machine’…a heart at the center of all the cyber-tech and Star Trek level dialogue. Machine is a very endearing character and her almost child-like reaction to varied emotions makes her very ‘human’ despite her hardware and superhuman capabilities. This makes us emotionally invested in her story and we feel her confusion as she is caught between well-intentioned Dr. McCarthy…who she loves…and the more sinister intent of Thompson who wants an obedient instrument of war. It’s not hard to guess what side she chooses or how this is going to end up, but the robot’s emotional journey is at the core here and that is portrayed very well. Even the good natured McCarthy has his own secret agenda…benign as it is…and thus Machine is forced to do what’s best for her and her kind. Director James portrays the situation with a solid emotional base that makes it all work. We do really feel bad for Machine being caught in the middle of two opposing ideologies and don’t blame her for choosing her own ‘destiny’. On a technical level the FX are quite good and there is some very well-staged action in the final act, including some surprisingly bloody moments. The music is a very 80s electronic score by Tom Raybould, that really fits and there is some nice cinematography by Nicolai Brüel. For a very low budget film, it has strong production value to go with a solid, if not familiar story.

Big factor in making the story work is a strong performance by Caity Lotz (The Pact) as Ava and Machine. Her Ava is an intelligent and idealistic young woman whose naivety to the evils men do gets her killed. It’s easy to see with the use of her brain patterns to create Machine as to where the robot gets her heart and moral center from. As Machine, Lotz creates a being that has both a child-like innocence and dangerous superhuman capabilities. Her reactions to her new emotions are endearing, as is her youthful enthusiasm when enacting simple things we take for granted, such as touch, feel and dancing. Lotz also makes her a bit scary when she is given her lethal training behind McCarthy’s back and uses it to stage the last act rebellion against the sinister bureaucratic establishment at the hidden base she was created in. It is a very three dimensional performance by the actress and really helps make James’ flick come to life much like Machine. Stephens makes for a noble if not flawed Dr. McCarthy. He has good intentions, but Stephens gives him a bit of an edge, as while his ulterior motives are understandable, he is allowing his work to be used for a darker purpose and he knows it. He also portrays well McCarthy’s change of heart when it comes to Machine’s use as a weapon upon learning she is far more ‘human’ than expected. Denis Lawson makes for a perfectly slimy villain. His Thompson is a man with an agenda and who will lie, cheat and kill to get it done. It’s a very stereotypical character, but Lawson makes him work by oozing douche bag from every pore.

I liked this movie a lot. It does have a very familiar story, but also has a heart that makes it work beyond familiarity. Caradog James creates a very interesting near future which is bleak, but somehow given hope by a machine that has a clearer and less selfish view of the big picture of life. He has a good cast, especially leading lady Lotz who really gives her robotic character some nice dimensions. It’s an oft told tale, but told from an interesting angle that makes it’s automoton a lot more ‘human’ than most of those around her. An entertaining little Sci-Fi thriller that packs a bit of a punch when it needs to.