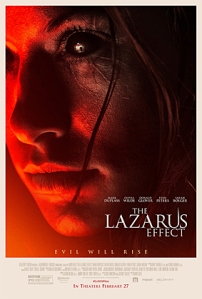 I credit Blumhouse Pictures a lot for the recent horror renaissance, so it’s disappointing when they crank out a lazy, generic piece of PG-13 horror like this. The Lazarus Effect is a routine, derivative (Flatliners anyone?) and predictable story about some scientists and students who are working on a way to prolong the period of time in which a recently dead person can be successfully resuscitated. Predictably, one of the group is accidentally killed and the far from perfect formula is used to revive them. Also predictably, they don’t come back quite normal. Film is competently directed by David Gelb, but the script by Luke Dawson and Jeremy Slater reeks of been-there-done-that. We’ve seen all of it before and much better done. The film also wastes a good cast on top of that. Wasn’t completely bored, but wasn’t completely interested either. Stars Olivia Wilde, Mark Duplass, Sarah Bolger, Evan Peters, Community’s Donald Glover and Ray Wise.

The most heartbreaking thing about this flick is that it is the last film starring the underrated and sadly gone too soon Brittany Murphy. it’s no surprise this convoluted mess was left on a shelf for five years before finally getting a minimal release. The barely coherent story follows pretty Christine Webb (Shantel VanSanten), who graduates high school and on the night of celebration and her announcement that she and her boyfriend James (John Robinson) want to get married, gets into a horrible car accident that costs the life of her parents. A year later Christine is married and in college and being stalked by a mysterious figure. She is also lusted after by her cop brother (James Patrick Stuart), her husband’s co-worker Ryan (Julian Morris) and apparently the director of this film as all the close-up shots of the pretty Miss VanSanten border on softcore porn. Murphy plays cop brother Bill’s psychiatrist wife whose barren womb sends the police officer into another woman’s bed…and to lust after his sister like we mentioned. There is a conspiracy of murder and shocking reveals and by the end of this badly edited soap opera level mess, I lost track of all the plots, sub-plots and double crosses and joined the cinematographer in staring at Shantel VanSanten’s shapely rear. Was there even a point to this movie?

I’m not a big fan of the Troma movies and this Canadian horror/comedy is definitely in the Troma-wannabe category. The story takes place in the rural town of Woodhaven and finds lazy, alcoholic cop Lou (Leo Fafard) being transformed into a werewolf by a group of cultists, who need werewolf blood for a ceremony to make themselves more powerful. Lou though, won’t let a slight case of lycanthropy keep him from catching the bad guys. The use of practical gore and make-up effects is about all this dull and unfunny flick has going for it. Most of the attempts at humor fall flat and the action sequences are very routine and strictly low budget…which would be fine if they had some energy or style. There are generous amounts of blood spattered, but the film is lethargically paced even for a movie that isn’t even 80 minutes long. That and it is just trying way too hard to be a midnight movie and the best of those types of flicks usually happen unintentionally. Not sure where all the internet hype comes from, as it lacks the style, originality, cleverness or outright manic over-the-top ferocity that makes a good cult classic.