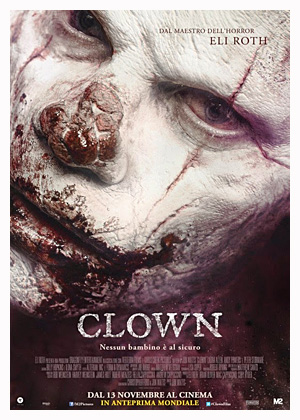 Eli Roth produced horror tells the ill-fated story of realtor Kent McCoy (Andy Powers) whose son Jack (Christian Distefano) is having a birthday. The clown scheduled to appear cancels at the last minute, leaving Kent in a bind. But as luck would have it, Kent finds an old clown suit in one of the homes he’s showing and saves the party. Unfortunately, it’s bad luck, as the suit is not a suit, but the skin of an ancient Nordic demon called a Cloyne. This creature of legend is the genesis of the modern clown, but instead of entertaining children, it lured them to it’s lair and ate them. Now Kent is facing a horrific nightmare as the ‘suit’ won’t come off and his son and wife Meg (Laura Allen) watch him slowly turn into a monster…one that sees Jack as a potential meal.

As silly as this horror sounds, it is actually portrayed very seriously by co-writer…with Christopher D. Ford…and director, Jon Watts. Watts takes what could have been a spoof and makes an effective little horror film out of it by avoiding milking the clown clichés and treating his film more like a werewolf flick, with a likable subject reluctantly turning into a vicious monster…one that eats children. Watts gives his horror a strong atmosphere of dread and is not afraid to graphically show Kent/the Cloyne’s hunger being sated on some unfortunate youths. The pace of the film is actually moderate and while it could have used a bit more energy at times, there are some very effective sequences and the serious take on the story does not come without having a little fun with the subject matter, such as a gruesome yet amusing scene at a Chuck E Cheese. The gore is plentiful and well executed, the film can be creepy and intense at times and we even get Peter Stormare as the suit’s previous owner/wearer, Karlsson, who has some grim news about how the ‘suit’ can be removed and the demon stopped. A solid little horror for a potentially comical premise.

As for the cast, Andy Powers plays Kent as the bland family man he is and then as both sympathetic victim and vicious monster. He works in the role well, though could have had a bit stronger presence. Laura Allen is very effective as the hot mom forced to deal with the living nightmare of watching the man she loves turn into monster and having to make some terrible choices to deal with it and protect her son. As the son, Distefano is effective and never strays into the annoying child zone and is quite sympathetic as Jack. Stomare is fun as Karlsson. He provides the Cloyne background and details and tries to assist Meg in stopping, or saving, her husband and acts as a sort of Van Helsing character with his experience with the fiend being very personal.

Flick isn’t perfect. A little more character development with the McCoy family could have strengthened their characters and the moderate pace sometimes works against it. Otherwise this was a solid and effective little horror flick, despite what is a very silly premise. Director Jon Watts takes the subject matter seriously and crafts a pretty good horror movie out of it, without drowning it in the clown clichés…though they aren’t completely avoided either. Definitely an an entertaining little flick with a novel twist on the scary clown movie.