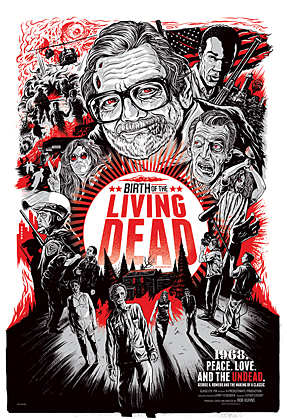 Birth is a fun and informative documentary on the making of one of the greatest horror films of all time. The flick chronicles how George Romero’s Night Of The Living Dead came to be, through not only interviews with the legendary filmmaker himself but, reflections and observations from others such as indie filmmaking fixture Larry Fessenden (who also produced), Walking Dead producer Gale Anne Heard, NOTLD star Bill Hinzman (earlier interview footage from before his death in 2012) and a host of others. They takes us through Romero’s interest in being a filmmaker, to his early commercial days, to the financing and filming and then to the struggle to get it released and it’s eventual impact. They also compare events going on in the world, at the time, such as the Viet Nam War and how it effected the way people viewed Romero’s classic, to how Romero’s trend-setting zombie epic unintentionally reflected a lot of what was going on in the world, as well. It’s very entertaining and takes one inside the making of a little movie that has become a bonifide classic. We find out how some of the film’s most effective elements were sometimes by mistake or simply out of budgetary necessity and how some of the most quotable lines were ad-libbed on the spot. We also get the sad story of how a simple mistake robbed Romero and company of any rights and profits from the movie to this day. And we discover that the groundbreaking casting of a black hero at a time when that was still not a popular notion in Hollywood, was simply a case of hiring the right actor to play the part and no one saw the racial impact the casting of Duane Jones would have. The part wasn’t even written race specific. All in all, it’s a charming and very affectionate look at the making of one of horrors all time greatest flicks from one of it’s most celebrated filmmakers. A must for Romero and zombie film fans alike.