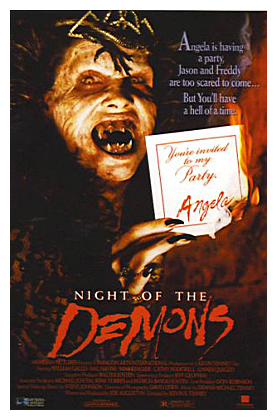 This is another 80s horror written and directed by Kevin Tenney (Witchboard) and is a predominately silly flick with some the gore and scares sharing time equally with the laughs and goofy humor. While the film has more of a horror movie feel than the soap opera-ish Witchboard, it still is far too goofy to really be scary despite some effective and plentiful gore.

The film takes place on Halloween night at a party being thrown at an abandoned funeral home by high school goth chick and suspected black magic user, Angela (Amelia Kinkade) and her friend Suzanne (Linnea Quigley). An assorted group of party goers arrive including Judy (Cathy Podewell), party animal Stooge (Hal Havins) and nerd Roger (Alvin Alexis). Of course no party in a former mortuary can be complete without a seance and before you can say “not a good idea” Angela and Suzanne are possessed by demons and begin to gorily dispatch the assorted party guests who themselves rise from the dead as vessels for demonic entities.Will anyone escape this Halloween party alive?

I’m not really a big fan of this film. Despite the amusing premise and the plentiful blood and gore, It’s a very slow moving horror/comedy that is not particularly scary and not all that funny either. Tenney seems to want the best of both worlds here from Joe Augustyn’s script and while the set-up was ripe for some Halloween fun, the film is directed very by-the-numbers and is far less clever than it thinks it is. Maybe the reason is that the story is pretty thin and probably would have been better served as an episode of a TV show than stretched out over 90 minutes. Once the girls are possessed the slowly isolate others and dispatch them rather methodically dispensing tired one-liners as they gruesomely off their victims. There is little suspense as our characters wake up to what’s going on and try to find a way out and it’s pretty obvious who are there to become corpses and who are there to be our survivors. It’s just a matter of sitting through the weak comedy and equally weak attempt at scares till it all plays out. There is some heavy 80s nostalgia at this point and at least David Lewis’ cinematography makes this look far more like a horror film than Tenney’s Witchboard. Dennis Michael Tenney once again does the music and it is a bit atmospheric though, not very remarkable.

The cast are all weak. Cathy Podewell tries hard as our final girl/heroine Judy, but the rest of the cast are pretty wooden including Kinkade as Angela and that hurts the film which needed a stronger villain to work better. Havins is just annoying as frat boy-like Stooge though, in his defense, his dialogue is terrible. Quigley is there to show her boobs and when she does speak, her line readings are far flatter than her cleavage and her demonic form is not very threatening. Roger is a stereotypical cowardly nerd who finds his courage and is probably one of the more successful characters in the flick. The rest are generic and unmemorable demon fodder and there is no attempt to really make the characters anything more than the two dimensional cliche’s they are.

In conclusion, I was never all that fond of this flick, though respect that it is a cult classic with a following…I’m just not one of the following. I do appreciate the 80s nostalgia and it is heavy with that, but overall find the film a dull and by-the-numbers horror/comedy that is not all that successful at being either. It’s a silly flick that has the benefit of some well executed gore and make-up FX and otherwise not much else to recommend. It’s almost a mystery as to why it’s premise had so much more potential for a fun time than Witchboard yet, is half as fun. Also a good example of how light and silly horrors got in the later half of the 80s. (For my article on the subject of the tonal change of horror through the 80s, go here!)