This week’s double feature is in tribute to horror icon and one of the original horror final girls, Marilyn Burns who passed away at the age of 65 this week. I put together both of her Tobe Hooper directed horrors, the classic Texas Chainsaw Massacre and the cult classic… and hard to find… Eaten Alive. 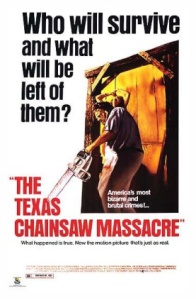 Partially inspired by true life serial killer Ed Gein, this is the original teens v.s. redneck cannibals flick and still the best and most effective. It is also one of the greatest horror films ever made and one that has influenced many of today’s filmmakers and created a horror sub-genre that is still very prolific even today.

5 friends travel to checkout stories that the grave site of brother and sister Franklin (Paul A. Partain) and Sally’s (Marilyn Burns) family has been vandalized and on the way to their family’s abandoned property, they encounter a bizarre hitchhiker (Edwin Neal) who seems to mark them for something by leaving a bloody smear on their van. That something turns out to be an encounter with his fiendish family of backwoods cannibals including the hulking, chainsaw wielding Leatherface (Gunner Hansen) and the disturbed family matriarch (Jim Siedow) who runs the twisted clan. Now, one by one, the young victims are murdered by this deranged family who have found a horrifying way to keep their kitchen and BBQ business filled with meat now that the local slaughter house is closed. Will any of them escape or will they all become lambs for the slaughter?

Director and co-writer Tobe Hooper makes every frame of this classic fright flick give you the willies and saturates this tale of teens and cannibalistic rednecks with dread and tension from the first frame to the last. From the opening scene at the cemetery, to the fateful picking up of the bizarre hitchhiker, to arriving at “the house”, this film has us on edge for the full duration. Hooper takes his teens on a nightmare roller-coaster ride that will not end well for most and his disturbing visuals and frantic explosions of deadly action, take the audience along with them. The film looks unsettling with muted colors and bleak, desolate camera shots courtesy of cinematographer Daniel Pearl and his use of shadow makes the film’s old house setting even more unnerving. Added to this visual assault is a very disturbing soundtrack of strange sounds and music that give the film a really unsettling feel even in it’s quieter moments with some truly unique production design complete with furniture made from bones. The film oozes dread and Hooper adds just enough of a twisted sense of humor to keep us from being numbed to his horror show and makes us even more uncomfortable for giggling at his demented family while they horrify and torment their prey. The film is obviously bloody, though not nearly as gory as it’s reputation suggests or any of it’s sequels would become. Hooper ultimately creates one of the greatest horror flicks of all time and one of the most iconic horror characters in Leatherface. He also gets good work from all his cast from the likable young victims to the crazed cannibal clan, including making horror icons out of Leatherface and final girl Marylin Burns.

It all combines to make one terrifying and unforgettable horror flick. A text book example of how to make a low budget horror film. Also stars Allen Danziger as Jerry, Teri McMinn as Pam and William Vail as Kirk, who are among the 5 intended victims of Leatherface and company’s wrath and opening narration is by actor John (Night Court) Larroquette. A great horror and a true classic.

Tobe Hooper’s follow-up to The Texas Chainsaw Massacre is a strange film that brings back Chainsaw final girl Marylin Burns and follows a blood-soaked night at a spooky hotel on the bayou run by deranged proprietor Judd (Neville Brand). There is barely a plot as it simply follows a group of various guests and locals who find their way to Judd’s decrepit Starlight Hotel and fall victim to his scythe and are then fed to his enormous pet crocodile that lurks in a gated area of the swamp right next to the hotel. And that’s pretty much it.

Hooper once again creates a very atmospheric and disturbing movie, though it’s nowhere near as effective as his Texas-set classic. It’s a shame that the story and script by Kim Henkle, Mardi Rustam and Alvin L. Fast is borderline incoherent and never really gives a reason for the eccentric, well-know local Judd to turn viciously homicidal after running the old hotel for years. If Hooper had more of a story, he might have had another real horror treat on his hands rather than just a spooky, strange curiosity. He and cinematographer Robert Caramico give the film a very interesting look that is grungy like Chainsaw, but at the same time a bit more colorful and it gives the flick a surreal quality that helps make the less then stellar script work in it’s favor. There are some gruesome scenes and the film does get under your skin, but once it’s over, you realize there wasn’t much accomplished or much of a point…but Hooper still manages to give us the creeps to a good degree. He also wisely keeps his plastic prop croc dimly lit and in shadow so it remains effective even though it is obviously fake. Hooper and Wayne Bell again do the score and again the blend of music and unsettling sounds really goes a long way to making this chilling. It’s not a great horror by far, but it is a spooky and offbeat one that is definitely worth a look especially since Hooper’s work would become more mainstream upon landing the gig helming Poltergeist (which in itself is surrounded in controversy)…and I personally believe he lost his effectiveness upon going Hollywood.

The cast all do there part in helping this flick achieve it’s midnight movie aura. Marilyn Burns plays another damsel in distress who is a young wife and mother Judd kidnaps after murdering her stressed-out husband (Phantom Of The Paradise’s William Finley) and chasing her young daughter (Halloween’s Kyle Richards) into the crawlspace under the house. Poor Burns spends most of her time bound and gagged in her hotel room before being chased all over the place by Brand’s Judd in the last act. And speaking of Neville Brand, the actor delivers a very creepy Judd and it almost helps enhance the character’s creep factor that his dialog sometimes is made of rambling that makes little sense. He is quite over the top, but as the film does have a somewhat surreal, nightmare quality, it works in the character’s favor. We also get veteran Stuart Whitman as the local sheriff and future Freddy Krueger Robert Englund as a trouble making young local who meets the working end of Judd’s reptilian friend.

Overall, I like this film mainly for the atmosphere and the fact that the film has a surreal-like quality to it thanks to Hooper’s style and production work. The script is a mess and the film barely has what resembles a plot, but the talented Hooper makes a fairly spooky flick out of that script and it gets under your skin even if a lot of it doesn’t always make much sense and it comes off more as a series of loosely tied together vignettes than an actual story. It delivers get some very effective scenes and some decent blood and gore to go with it and despite it’s flaws, is a spooky flick, especially if watched along with a few brews. Also stars Mel Ferrer and ‘Morticia Addams’ herself, Carolyn Jones as the owner of a local brothel.