Reboot of this series based on Tom Clancy’s character features Chris Pine as a young Ryan recruited into the CIA as an analyst by agent Thomas Harper (Kevin Costner) after an impressive tour in Afghanistan that left Ryan with an injured back. Once healed, Ryan is sent undercover  for 10 years on Wall Street to uncover funds being channeled to terrorist organizations but, instead finds a plot between Russian businessman Cherevin (Kenneth Branagh who also directs) and high ranking Russian officials to completely bring down the U.S. economy. Harper thrusts Ryan into the field that takes the rookie agent from Moscow and back to New York City to stop the plot which involves a exploding a bomb under Wall Street. Branagh delivers an entertaining thriller based on Adam Cozad and David Koepp’s screenplay and gets good performances from himself and his cast. The film only falters when Ryan’s girlfriend Cathy (Keira Knightley) gets involved in the intrigue as it is cliche’ and highly improbable the CIA would risk the mission by involving a civilian directly in so delicate an operation. But, otherwise it is a solid enough thriller and while not memorable, it does pass the time nicely and moves quickly with enough action to offset the espionage. 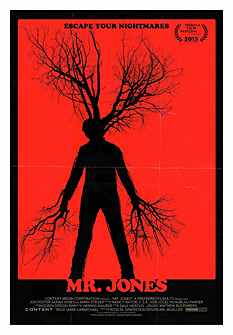 For the first 2/3 of the film, this found footage horror had me. The premise involves a young couple Scott (Jon Foster) and Penny (Sarah Jones) who move into a house in the middle of nowhere so Scott can film a nature documentary. But, the discovery of a mysterious neighbor and his bizarre sculptures leads the couple to think they have found the elusive “Mr. Jones” a reclusive artist who, in the 70s, sent random people around the country his strange pieces without explanation. In the art world he is something of a legend and myth. Now the subject of their film becomes Jones but, they start to find there is something more to his sculptures then art and that something may be a force they are not ready to deal with. Writer/director Karl Mueller comes up with a very interesting story and angle in which to work in the found footage format and it does grab the viewer at first but, then he blows it in his last act by trying to get too artsy and allowing the film to become simply incoherent and confusing. He goes overboard with his editing and visuals and totally looses control of the story which gets lost in an endless montage of imagery meant to be hallucinogenic but, only induces a headache and leaves us wondering what is really going on. It’s too vague and some of the images flashed before us seem simply random and without purpose. His small cast are fine and he does have a nice visual style but, in the end, gets too over-indulgent for his own good instead of finishing out what started as an intriguing story. Still, with a little restraint, Mueller could yet turn into a filmmaker to watch. Also stars Iron Man and Star Trek’s Faran Tahir which throws off the found footage illusion as he has been in two very high profile films and is instantly recognizable.