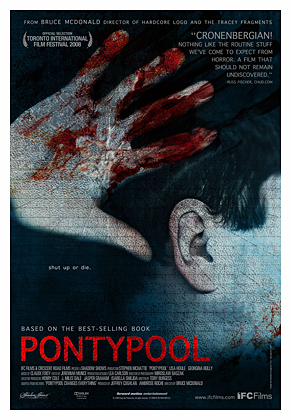 Pontypool is a very original take on the zombie sub-genere directed by Bruce McDonald and adapted by Tony Burgess from his own book Pontypool Changes Everything. The film centers on controversial radio DJ Grant Mazzy (Stephen McHattie) whose latest firing has brought him to work the morning show at a small radio station in the equally small town of Pontypool, Ontario. His rebellious nature rubs station manager Sydney Briar (Lisa Houle) the wrong way but, seems to amuse cute young tech assistant Laurel-Ann (Georgina Reilly). Aside from a brief encounter with a strange woman on the way to work, Grant seems to be having an average dull day of snowfall and school closings…but not for long. Unsubstantiated reports start coming in for what appears to be a riot near a doctor’s office. Station helicopter reporter Ken (voiced by Rick Roberts), who is actually in a Dodge Dart, reports a large amount of people mumbling incoherently and carrying out horrifying acts of violence with the military moving in. Suddenly a routine snow-day in Pontypool turns into an apocalyptic situation as the outbreak of violence increases and spreads, seemingly triggered by certain words or phrases that ignite panicked and violent behavior. Trapped inside the station, Grant and company must decide whether to keep broadcasting or keep quiet…but is keeping his mouth shut something Grant Mazzy is even capable of?

Unlike most zombie flicks, Pontypool doesn’t focus on the gore or carnage, though we get a glimpse, but instead the horror and isolation of it’s three main characters trapped in the remote radio station and receiving bits and pieces of the horrific details. It also gives a bizarre twist in that the ‘virus’ is triggered by certain words or phrases, literally locking the mind on those words till the person becomes frantic and then lashes out violently. To be honest, I had a little trouble wrapping my head around this concept, but McDonald portrays it so effectively and it does cleverly conflict with the fact that our main character is a DJ and talking is his way of life. Now his way of life has become key to violence and death. And the directing here is key to making this offbeat concept work so well. McDonald creates some real tension and atmosphere centering on just three individuals locked inside a small radio station and only getting panicked information from terrified witnesses in the middle of this bizarre outbreak. He let’s our imaginations work overtime envisioning what is happening and we can imagine far worse then even the best horror director can deliver. He also gives us a glimpse of these gibberish spouting killers as the ‘outbreak’ literally shows up at the radio station door and it is very effectively portrayed and successfully creepy. There is also some brief but effective splashes of gore and violence to accent what our imaginations have cooked up from the frantic earlier eyewitness reports. Granted, the film has it’s flaws. The concept of a disease(?) delivered through speech is a hard one to really grasp onto, original idea it may be, and some of the dialog bits had me scratching my head as to what the characters were talking about. But McDonald directs this with such atmosphere and intensity that the flaws don’t do much harm. And if the skilled direction is not enough, Bruce McDonald has a tight cast who all do good work to back him up.

As for that cast, I have always liked Stephen McHattie and he is really good here playing the eccentric rebel with a cause that is his Grant Mazzy. McHattie creates a strong characterization of a man who is colorful, controversial and sometimes too much a rebel for his own good. He is a bit of a jerk, but a very likable one who is thrust into a living nightmare where literally saying the wrong thing can get you killed. He is really impressive here and once again proves himself a very underrated actor. In support, Houle gives us a station manager who is not really equipped to deal with anything out of the ordinary in her small town station, but she turns out to be quite likable and conveys the horror of what is occurring outside her four walls very well. Reilly is cute and very endearing as tech support Laurel-Ann and while we get a hint of a crush on Grant, though it’s never acknowledged just conveyed in her performance. She creates a realistic character of a young, smart, slacker type that we can definitely see doing a job such as she does. And since the film is a character study rather then visceral horror, the fact that the cast is strong really goes a long way of making McDonald and Burgess’ concept work. There is also Hrant Alianak as a doctor who seems to understand what is happening and while he is fine, he is one of the characters whose dialog had me scratching my head a few times though that is the script, not the actor.

In conclusion, I really enjoyed Pontypool and it’s approach to the heavily used zombie sub-genre. The cast was really good and the direction was tight and intense. The concept was original, but I do admit it didn’t grab me totally and some of the dialog went over my head despite having my full attention. But flaws aside, it is an original Horror and in a time where sequels and remakes rule the genre, it is a refreshing and still very enjoyable breath of fresh air.