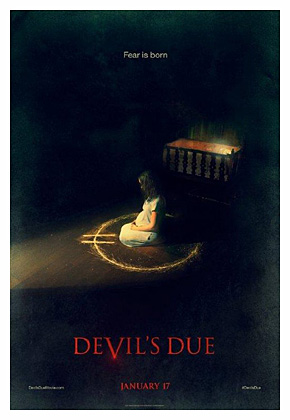 I like the found footage sub-genre. It just works for me. And I will admit there are a lot of bad ones out there, but when they work, they can be very spooky or entertaining. As these flicks go, Devil’s Due isn’t bad, there are some genuinely spooky bits, a few good scares and quite a few scenes that were very funny though I’m not certain if it was intentional or not. But entertainment is entertainment and I was reasonably entertained by this found footage horror.

The story finds newlyweds Zach (Zach Gilford) and Samantha (Allison Miller) McCall on a honeymoon in the Dominican Republic with Zach documenting everything because, Allison’s parents are gone and they never did, leaving his new wife with nothing to remember them by. After Sam gets shaken up at a very spooky palm reading, a jovial cab driver picks them up and promises to take them somewhere fun. He takes them to what appears to be a rave in a cave (good name for a band) and soon they both pass out. The camera is left on in Sam’s bag and catches what appears to be some kind of ritual or ceremony being performed with Sam at it’s center. They awake in their hotel the next morning with no memory of it and leave for home. But soon after they arrive home, Sam finds she is pregnant and with this unexpected pregnancy comes some weird occurrences, strange figures watching the house and some very odd and aggressive behavior from Sam. The further her pregnancy goes, the weirder things get. Zach begins to investigate and when he reviews his footage, he finds that there might be something demonic going on…and it might be going on inside his wife.

Written by Lindsay Devlin and directed by Matt Bettinelli-Olpin and Tyler Gillett (who directed one of the most effective segments, 10/31/98, in the anthology film V/H/S), this found footage horror is a fairly entertaining little movie. It doesn’t always succeed and some of the bits that might have been meant to be creepy are actually laugh-out-loud funny…such as the parking lot scene or the three teens encountering Sam in the woods…but this could just be the directors having a little fun with the familiar trappings of a story like this and ultimately, I’ll take unintentional or intentional laughs over boredom any day. The filmmakers cleverly overcome the “why are they still filming” by utilizing Zach’s action cam for some scenes. It’s a small camera that clips onto his clothes that he bought for their honeymoon activities (not the bedroom kind, relax!) and he wears it to document his ‘investigation’ so when the unholy water breaks, it continues to document the horror. They also have the mysterious figures who are watching Sam, infiltrate the house and set up hidden cameras to keep an eye on the couple and we get footage from these as well. And thus, when things really start to go all Rosemary’s Baby, we get a good view and the last act does work and even with a few cheesy moments, it provides some chills and scares and is pretty effective even though we have seen the ‘woman carrying a demon seed’ scenario many times before. The film does have some very spooky sequences. There are plot holes too, such as why the mysterious figures never encounter the McCalls’ dog when they enter the house to install the cameras, but they do when they re-enter the house at the finale. We clearly see the couple’s activities while the mystery men are in the house and the dog is not with them. But I’ll cut the filmmakers some slack as they did avoid the over-abundant use of jump scares that a lot of today’s horror likes to rely on and did try to give the film some genuine frights and do succeed on creating some creepy atmosphere. Not a perfect film, but certainly not a bad one either.

The two leads, Gilford and Miller make a cute and likable couple. Miller especially can evoke some sympathy or come across creepy when the script calls for it. And there are various supporting players who portray family members or individuals who we should be wary of and they all do a good job of coming across as fairly real, especially those playing relatives. And the dog was awesome even if his character seemed to disappear when convenient.

So, overall, I liked Devil’s Due. It’s not great, but the filmmakers show potential and they did entertain whether it was intentional or not. I laughed at a few things that might have been intended to be disturbing, but could have been the filmmakers having some fun. When the final act kicked into gear, it delivers some spooky goods and a few good scares. Once the credits rolled, I found myself having been entertained and that’s what counts. So if you like found footage or horror in general, give The Devil’s Due it’s due. And even better, it’s got some good music in it, too. Not sure I have ever heard Elvis played during a satanically themed movie before but… sorry King, it kinda works.

WARNING: the trailer, in my opinion, is very spoiler-ish and reveals some of  the best bits of the film.