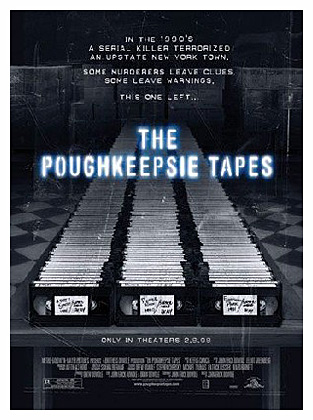 The Poughkeepsie Tapes is a very hard, but, not impossible, to find faux documentary that uses police confiscated VHS tapes and interviews with various witnesses such as FBI, law enforcement, family and friends to tell the gruesome and disturbing story of the Water Street Butcher (Ben Messmer), a still at-large serial killer who terrorized New York state and the surrounding area for over 10 years. The killer not only confounded law enforcement authorities while murdering numerous innocents, but also framed a former police officer for his crimes and forced a young woman (Stacy Chbosky) to be his slave and participate in his heinous acts for over a decade. Between the various interviews, we are shown clips of the killer’s homemade tapes documenting his increasingly cruel and sadistic acts from stalking his victims to their abductions to their grisly murders. According to this mock documentary, the true identity of this individual has never been discovered and he is still out there somewhere…

The thing that really hinders this horror flick is that the script by director John Erick Dowdle and producer Drew Dowdle never gives the interview subjects the least bit of realism in what they say. None of the people being interviewed ever sound like real people relating real information or experiences and their emoting, if any, never seems sincere. The so-called law enforcement officials and forensic experts interviewed, especially, do not sound like professionals and never achieve the sense of being real people. They sound exactly like what they are, unknown actors reciting dialogue for a movie. Messmer’s masked killer is also far too theatrical and over-the-top to be scary. Despite the disturbing acts we watch him commit, he seems to be channeling Nicholson’s Joker and it really hinders the credibility that we are watching actual footage of an actual killer. Again, never is there the illusion that this man is anything but an actor in a movie. The witnesses also never seem like real people, the killer’s landlord in particular never seems all that disturbed that all this all went on in her house. There are some sequences that are supposed to be creepy, but just come across as silly such as a scene involving two girl scouts who knock on the killer’s door selling cookies. Really? How could you even write this scene and think it could be taken seriously? Or worse, was it incredibly intrusive comic relief? That and a scene where an ex-FBI profiler (a hammy Ron Harper) turned teacher, uses infamous serial killer Ted Bundy like Hannibal Lecter to gain insight. The scene is equally silly and shatters any illusion this is real. And did we need to watch the balloon fetish scenes more then once? And maybe it’s me, but having the killer remain such a mystery let’s the Dowdle Brothers off the hook at employing any true cleverness in giving their killer a character with actual motives…none of which we learn beyond law enforcement conjecture.

On a technical level, I have some personal gripes that I won’t hold against the film, but as someone with videography and digital editing software experience, I had two problems here that annoyed me. One, I had, and still have, an old VHS camcorder and the quality is definitely not as bad as the film portrays…which leads me to my second point…I felt the ‘bad video’ filter used on the killer’s footage was obvious and overdone. There was a pattern to it that, to me, was easily detectable and thus distracting. But these points are personal from technical experience and I won’t apply them to how I overall rate this film.

So what did the film get right? By the nature of what is portrayed here, the killer’s footage is brutal, sadistic and therefor, very disturbing. There is some atmosphere here, even though we never get the sense that this is anything more then a movie with a gimmick, we still are treated to some very horrifying imagery. Director Dowdle has a graphic imagination and the combination of brutality and the killer’s theatrical tendency to dress his slave and himself in disturbing costumes and masks, does give us the chills. It’s too bad the film itself around these images wasn’t as equally effective. The side story of abducted ‘slave’ Cheryl Dempsey (Stacy Chbosky) that gets some focus in the last act, also works well and we are not only chilled at the effect her stay with her ‘master’ has had on her, but the actress does evoke sympathy in her performance. The scenes where she is forced to kill are equally sad as we see the hesitation in the actress’ body language and can sense her own horror. Too bad the rest of the cast couldn’t emote like her.

Which brings me to the cast. Except for Chbosky the cast are all fairly bland or just bad. Messmer’s killer overacts as stated earlier, as does Ron Harper’s ex-FBI/criminology  teacher. None of the rest of the cast of unknowns ever give us the impression we are watching real law enforcement officials or real friends and family or people who have suffered any actual emotional loss. The lack of conviction in most of the performances really hinders the film’s effectiveness in trying to convince us this is a real documentary about real events. It’s only a movie and we never forget that. No better reminder then the actor (Chip Goodwin) playing the son of accused ex-cop James Foley (Bill Bookston), he is awful to the point of laughable and it’s jarring to what little atmosphere the film had tried to maintain up to this point. Not to mention, the sub-plot of Foley being framed for the crimes doesn’t really add much or go anywhere anyway and Goodwin’s dialog is pretty awful in itself.

Overall, this film which MGM gave a small release and then buried with no plans to have it see the light of day, may or may not be worth finding if you are even interested in looking. It has some sadistic moments which do chill, but overall fails to ever pull off the illusion that we are watching anything but yet another brutal and blood-soaked movie about yet another serial killer. The music by Keefus Ciancia is simple, but does add a bit of atmosphere to the proceedings, at least, which helps. I won’t outright recommend you track this down, unless you are a completest when it comes to serial killer flicks or found footage or horror in general. Happy hunting?

UPDATE: This film is finally getting an official release on 10/10/17 from the awesome folks at Scream Factory!

One thought on “HORROR YOU MIGHT HAVE MISSED: THE POUGHKEEPSIE TAPES (2007)”