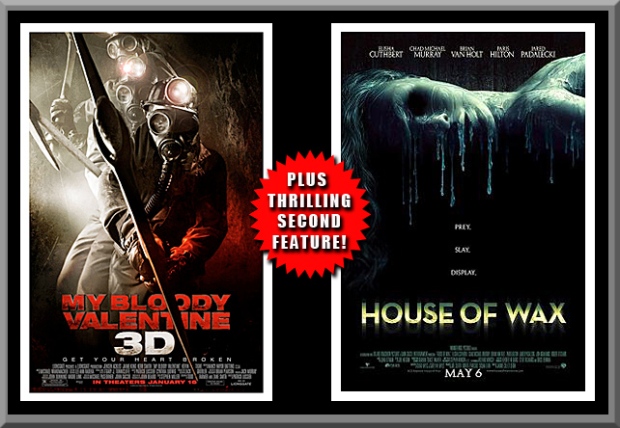 This week’s double feature is comprised of the remakes/reboots/re-imaginings of two horror classics which are actually not bad on their own as horror flicks go. They may not be held in the same regard as the films they are based on but, as a fun night on the couch, they both provide some bloody horror entertainment and stand enough on their own so as not to dishonor their predecessors. 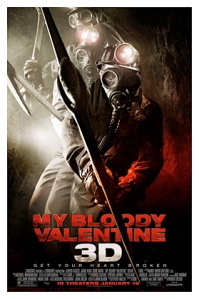 While I can’t say I am a fan of remaking horror classics, it has been a trend for quite a few years now and occasionally you get one that stands on it’s own like the recent Evil Dead remake or this fun horror which actually, slightly improves on the 1981 original …which, in my opinion, doesn’t quite live up to it’s reputation, though is still nostalgic and enjoyable.

The 2009 remake is based on the original’s story, but basically does it’s own thing and that’s what helps keeps it from being a bland redo. Filmed in 3D, this film opens with a mining accident caused by the mine owner’s son, Tom Hanniger (Jensen Ackles), who forgets to vent the lines and the resulting explosion traps six miners inside a cave-in. When they are finally dug out, five are dead at the hands of the sixth, Harry Warden (Richard John Walters), who murdered them to preserve oxygen for himself. When found, he is comatose and subsequently hospitalized. A year later Harry awakens from his coma and after a bloody massacre at the hospital, returns to the mine on Valentine’s Day where a party is in progress and he viciously attacks the party goers which includes Tom, his girlfriend Sarah (Jaime King), along with Axel Palmer (Kerr Smith) and his girl Irene (Betsy Rue). Many youths are killed by the time the sheriff (the great Tom Atkins) arrives and guns down Warden resulting in another cave-in. Warden is thought dead and Tom, still feeling guilt over his accident causing mistake and the following deaths, leaves town and disappears. We pick up the story 10 years later where Axel is now sheriff, Sarah is his wife and Tom has returned to sell the mine now that his father has died. But, death and murder has also returned to Harmony as a man dressed in miner’s gear is going on a killing spree with his trusty pick-axe. He is leaving a trail of mutilated bodies, some with hearts ripped out and placed in heart-shaped boxes. Did Harry Warden escape the mine and his wounds 10 years earlier, or has the approaching sale of the mine sent an unbalanced individual on a copy-cat killing spree? All this peaceful town and it’s inhabitants know is that suspects and bodies are piling up. Will the killer be unveiled and stopped?

Brought to us by the team of director Patrick Lussier and writer/actor Todd Farmer (co-wrtten with Zane Smith)…who would next collaborate on the grind-house style Drive Angry…this remake uses the original’s storyline to get things started, then goes off on it’s bloody own. Lussier is able to have a good time with the flick, adding some intensity, livening things up and giving it a bit faster pace, which the original film lacked. He also adds a touch of humor here and there such as a scene where he gets to slaughter his writer Todd Farmer, in an amusing sex scene gone wrong with Axel’s ex, Irene, in a seedy hotel. The classic original could have benefited from some of what Lussier brings here, as it was very by-the-numbers and had a very dry approach…though, credit where credit is due, the original had a bit more atmosphere.

Lussier also gets lively performances out of his leads, especially our final girl Jaime King who proves to be a resilient and tough woman when corned by a psycho with a pick axe. Ackles and Smith are both good as well, especially considering their characters are not only in a competition for Sarah, but flip-flop back and forth as possible suspects or potential heroes. And Tom Atkins is a delight to watch as always.

The film is not perfect. Filmed for 3D, there is a lot of stuff thrust at the screen and it gets tiresome watching it in 2D and having scenes often stop for a few seconds to stick something in your face. The big reveal in the film is not as surprising as it was in the original and there is some mediocre CGI mixed in with the abundant prosthetic gore. And while on that subject, the film is quite gruesome like the original, but in the last act I have to admit the whole death by pick axe thing was wearing out it’s welcome. At least the original added some variety in it’s kills.

Overall this is a fun and entertaining slasher that has a good time and pays homage to the original yet, takes off and does it’s own thing. I also give it credit for focusing on a group of characters who are in their late twenties/early thirties than the usual nubile teens or college kids. It’s not all that often that the final girl is a final MILF. It may not be remembered as a classic like the original 1981 film is, but it is a fun horror that entertains on it’s own and doesn’t dishonor it’s source material. A fun ‘Saturday night on the couch’ horror. Also stars Kevin Tighe from the classic 70s show Emergency as the mine’s manager.

House Of Wax may share the title of the 1953 Vincent Price classic, but it’s plot is more Texas Chainsaw Massacre with wax than it is a true remake of that vintage horror. The film opens with 6 young people, including Carly (Elisha Cuthbert) and her delinquent of a twin brother Nick (Chad Michael Murray), on their way to Louisiana for a big football game. Along for the ride are Paige (Paris Hilton), her boyfriend Blake (Robert Ri’chard… yes, that’s how it’s spelled), Carly’s boyfriend Wade (Jared Padalecki) and Dalton (Jon Abrahams). They decide to camp off the side of the road and are vexed that night by an ominous truck glaring it’s headlights at them. After chasing the truck off, someone returns later that night to videotape them while they sleep and mess with Wade’s car. Something is not right in them thar woods! Carly and Wade decide to try to get the car fixed while the others leave for the game. They encounter a very odd local man dumping road kill in a huge pit filled with dead animals and hitch a ride with him into town. Makes sense! But the town they arrive at seems devoid of much life and despite being very remote, is home to a large and very creepy wax museum. The only living soul seems to be garage mechanic Bo (Brian Van Holt) who offers to take them up to his decrepit house to get the proper part for Wade’s car. Inside, Wade unfortunately meets Bo’s wax masked brother Vincent (also Van Holt) and Carly soon becomes the hunted prey of two very twisted individuals who seem to have a hobby of turning unsuspecting visitors into wax statues for display in this empty ghost town. But worse still, her brother and friends are on the way back and are looking for her and may soon join the grotesque side show attraction these demented ex-siamese twins have made of the little town of Ambrose.

Written by Chad and Carey Hayes and directed by Jaume Collet-Serra (Orphan), this ‘remake’ is actually a fun popcorn horror despite being very derivative of things we’ve seen before. If you go in not expecting much, it actually has some good chills and thrills and delivers some good gore. Collet-Serra has a really nice visual style that gives the film a very unsettling look, provides some disturbing atmosphere and really shines in the fiery climax. There are some definite lapses in logic here and characters do make some dumb decisions to move the plot along, but no worse then we are used to in films like this. Though the most annoying example is a scene with Bo securing Carly to a chair with duct tape and then wrestling with her to super glue her lips closed, when all he had to do was use another strip of duct tape and voila!…silent captive. It’s done for shock value and is just stupid and completely unpractical…not that I know what practical behavior is for a serial killer. So, if you are a fan of backwoods horror this is certainly no worse an offender in terms of character stupidity and certainly delivers what fans of the sub-genre enjoy… at least enough to make this a good time, though fairly forgettable once it’s over.

The cast are fine with Cuthbert really standing out as a strong and resourceful heroine which makes me wonder why her movie career remained unremarkable…the awful Captivity probably didn’t help. Media darling Paris Hilton was far better than expected and since her character doesn’t do much, there wasn’t much expected of her and that works fine. She was cast for her notoriety and is quite adequate in what little she is asked to do. Murray makes an OK douche turned hero and his performance picks up once Nick and his sister go up against Bo and Vincent for the final act’s twins vs. twins smackdown. The rest of the performers are adequate as fodder for slaughter and wax sculpture and there is no mistake that that’s what they are for.

The make-up FX are good and there is plentiful gore. Collet-Serra gives us some nice suspense and some tension, especially in the action packed last third where we get some fun set-pieces, including the climactic showdown in the burning wax museum. It’s nothing we haven’t seen before, but it’s done well and overall it entertains well enough for a night on the coach with some brews. And as long as you don’t expect anything more, House Of Wax is perfectly fine amusement for a Saturday night horror fest.