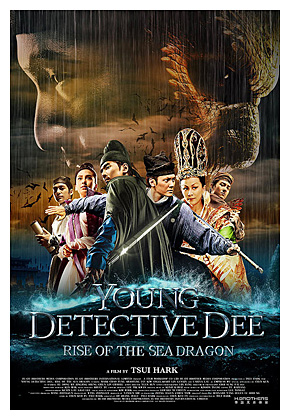 Detective Dee And The Mystery Of The Phantom Flame was a fun martial arts mystery and it’s success has inspired Hong Kong filmmaker Tsui Hark to have another go around and this time he goes back to the character’s beginnings and create a prequel which portrays Dee’s first case as a member of the Da Lisi, the law enforcement agency of the city of Luoyang. He also has chosen to add a lot more fantasy elements this time as Dee’s first case involves a sea monster, a merman, a vile plot to poison Luoyang’s public officials, including the emperor, and a beautiful courtesan (Angelababy… which is the real stage name for actress/singer/model Angela Yeung). The movie opens as Dee (now Mark Chao) enters the city of Luoyang to begin work as an officer of the law but, right away he is thrust into a case involving the attempted kidnapping of courtesan Yin Ruijii (Angelababy) which becomes complicated when a mysterious ‘merman’ becomes involved. The case is also somehow linked to a massive sea monster that destroyed Luoyang’s war fleet and is being investigated by Dee’s rival Yuchi Zhenjin (Feng Shaofeng) who thinks Dee is not to be trusted and would rather see him behind bars. The plot thickens as the city’s officials have been poisoned and somehow Dee mush earn his rival’s trust and find out how all these elements tie together before it’s too late. Dee prequel is not without it’s entertainment there is definitely some fun here but, it is also a lot more far-fetched then it’s predecessor and a lot longer as it is very plot-heavy despite the lighter nature of that plot. Hark seems to really go overboard with the sillier elements of the movie and equally so with the CGI effects and the film tends to be a bit overblown at times like his 2001 The Legend Of Zu which was in CGI effects overload. The previous Dee had fantasy elements but, they were grounded and restrained, here Hark really cuts loose and we get a film that is a lot lighter and a lot more cartoonish then the last movie. Aside from creatures and gravity defying foes, Dee also seems to have an ability that resembles ‘Spider Sense” as he can deduce complicated and detailed conclusions just by looking at objects and this ‘skill’ is vividly illustrated with CGI fueled sequences which make him appear borderline clairvoyant. It’s silly. The FX this time are mixed with some CGI being weak and some, like the film’s really cool sea monster, are excellently rendered. The film was obviously made in 3D and we get a lot of stuff flying at us and it is really distracting in 2D and the martial arts sequences are really over the top this time and don’t even try to seem somewhat grounded in reality. It just seems Hark went really overboard and at 133 minutes, he also stretches things out far too long and despite all the action and fantasy, the film seems very long-winded at times. The cast all perform well and while Mark Chao gives it his all as young Dee, he just doesn’t quite have the screen presence of veteran Andy Lau though, his Dee is likable if not a touch smug. The first Detective Dee was an entertaining movie and as a fan of this stuff, I did find much to entertain me here but, it is still an overindulgent, far-fetched and sillier step down from the first movie which, in itself wasn’t perfect and and would have been better served by a little restraint. Worth a look for Hong Kong film fans but, it’s a bit of a disappointment and just barely avoids being an overblown mess. Also stars Carina Lau reprising her role as Empress Wu from the the original Detective Dee, the only original cast member to return.