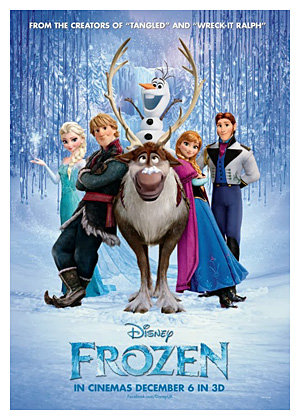 I’m not the biggest Disney fan. When I was a kid my parents took me to se things like The Towering Inferno and The Poseidon Adventure and while we did see the occasional Disney flick, my sister and I seemed bored by the traditional kid stuff. So, I don’t have that fixation on their flicks like others do but, I have seen and enjoyed a lot of the new wave Disney stuff that started with The Little Mermaid… though I do prefer Pixar’s stuff more. So, I finally got around to what has turned out to be one of Disney’s most successful cartoons in years and must say I did enormously enjoy it, though, I am still curious why this particular one has had such a massive appeal. The story opens with two young princesses… big surprise there… Anna and Elsa who live in the beautiful kingdom of Arendelle. Elsa has magic abilities to control and create ice and snow and during some exuberant play with Anna, the younger sister is injured. This causes her parents, the King and Queen to sequester her away from others so, no one finds out about her powers or is hurt till she learns to control them. But, when the two sisters grow to be young women, tragedy strikes and their parents are lost at sea. Now it is the powerful Elsa’s job to take the crown and rule but, a fearful Elsa loses control at her coronation and the new crowned Queen unleashes her power on a frightened populace, causing her to flee into the mountains in seclusion and subsequently throw the kingdom into eternal winter. Now it’s up to the spunky and resourceful Anna to find her sister and help her put an end to the endless Winter and lay to rest the kingdom’s fear of her powerful sibling… their queen. Of course, along the way she is aided by handsome ice salesman Kristoff, his reindeer Sven and talking snowman Olaf while being thwarted by the villainous Hans and the weasel-like Duke Of Weselton. Will she save her sister and the land or will the power hungry villains stop the sisters cold? Written by Jennifer Lee and co-drected by Lee and Chris Buck, Frozen is an enormously entertaining fairy tale that is fueled by some very strongly endearing characters and the usual peril, heroics and romance. The plot in itself is traditional Disney fairy tale stuff but, it is the exceptionally lively and colorful characters that put this over the edge and make it special. Not to mention the computer animation is sumptuous in both character design and the spectacular visuals and backgrounds. There are songs too but, most are simply functional though very well sung by the likes of Kristen Bell and Idina Menzel who voice and sing adult Anna And Elsa respectively. The only one that really stands out and is a show stopper is Menzel singing ‘Let it Go’ which is a powerful number supported by some beautiful vocals and animation. I also did like that Lee chose to keep Elsa a tragic figure in that she never turns evil but, is simply too upset and guilt-ridden to fix what she’s done and right what has gone wrong. Other characters become the villains of the piece instead and so we root for both Anna and Elsa to save each other and the day along with the equally endearing Kristoff, Sven and Olaf. And obviously, Anna and Kristof fall for each other, not that they’ll admit it. A really entertaining and fun animated fairy tale/adventure with some very three dimensional and lively characters to populate it. One of Disney’s best animated tales in quite some time… though I did enjoy Tangled quite a lot too. Also features the vocals of Jonathan Groff as Kristoff, Josh Gad as Olaf, Santino Fortana as the devious Prince Hans and the multi-talented Alan (Firefly) Tudyk as The Duke Of Weselton. A delightfully entertaining flick.

3 and 1/2 Olafs… would have been four if not that most of the songs are forgettable save “Let It Go”.