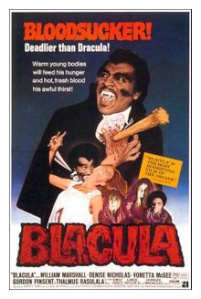 Blacula is one of the best examples of the 70’s blaxploitation films refered to in today’s politically correct times as Soul Cinema. Not only does it properly represent the era but, it is also simply a good horror flick, providing some legitimate chills and thrills, as well as, a bit of bittersweet romance too. As written by Raymond Koenig and Joan Torres and directed by William Crain, the tale of an African prince cursed to become the undead by Dracula himself and released from his ages old prison in modern day (at the time) Los Angeles, is a very entertaining movie even without the added 70s nostagia factor. There is lots to enjoy as Blacula builds his undead army and romances a woman who is the striking image of his long dead wife. A big part of the film’s success is the casting of Shakespearean actor William Marshall (know to many of today’s movie fans as The King Of Cartoons from Pee Wee’s Playhouse) in the lead role. Marshall brings a sense of power and nobility to the cursed African prince, Mamuwalde and knows exactly how and when to bring the monster to life when called upon. He even succeeds in making him sexy and sympathetic at the appropriate moments. He is supported by a good cast that brings life to what could have been two dimensional roles including Vonette McGee as Tina, a beautiful woman who resembles Blacula’s lost wife, Luva (also McGee) and veteran actor Thalmus Rasulala as a Dr. Gordon Thomas, a forensics investigator who serves as the film’s Van Helsing character and is helping the police investigate a rash of mysterious deaths. Three guesses who’s responsible for those. Sure it’s campy fun at this point and the FX are cheesy by today’s high standards but, that doesn’t negate the work of those in front of and behind the camera as Blacula delivers lots of spooky entertainment with class, style and not without a touch of humor. A classic of more than one genre.

EXTRA TRIVIA: It is said that  William Marshall himself worked with the filmmakers to give the character nobility and is responsible for his origin as an African Prince which was not part of the original script.

Blacksploitation classic tells the story of African-American Dr. Henry Pryde (Bernie Casey) who is working tirelessly to find a cure for liver disease. He develops a serum that shows potential but, he can’t perfect it without human experimentation. After a failed test on a dying woman, Henry decides to test the serum on himself. The result transforms the valiant doctor into a super strong, violent tempered… white man. Directed by Blacula’s William Crain, this 70s horror treats it’s story with respect despite how silly it is and Crain, as with Blacula, gets good performances out of his cast that also includes Rosalind Cash (The Omega Man) and Marie O’Henry as Pryde’s love interest, a local hooker named Linda. Sadly, Larry LeBron’s script from an idea by Lawrence Woolner doesn’t nearly make as much use of the classic story it’s based on as did Blacula, nor is Crain able to give this film the same gothic flavor and style he did with that film. It’s pretty much a generic monster movie with Mr. Hyde stalking and killing Linda’s fellow hookers and their pimps while the police trying to find and stop the rampaging killer. The obvious blaxploitation elements are present but, seem a bit forced here as opposed to Blacula where they were just part of the characters and their life at that point in time. Still, the film does have that 70s nostalgia and is worth a look for those interested in the blaxploitation era of filmmaking. Not to mention the movie certainly is not without it’s entertainment value and is never dull. Also noteworthy are the Mr. Hyde make-up effects on Bernie Casey which were created by the legendary Stan Winston.