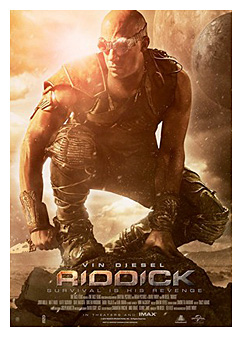 Third feature film adventure of Vin Diesel’s lethal escaped convict Riddick picks up shortly after where The Chronicles Of Riddick left off with the man who sees in the dark being dethroned, betrayed and left for dead on a hostile planet with not only a horde of lethal creatures to deal with but, not one but two teams of bounty hunters out for his head… literally. For the most part the film is somewhat entertaining but, is routine and completely forgettable once the credits roll… just like the last film was. Why can’t they find a really good story to put this really cool character in? Also stars WWE Superstar Dave Bautista and fanboy favorite Katee Sackhoff as a bounty hunter who may want something other than Riddick’s head.