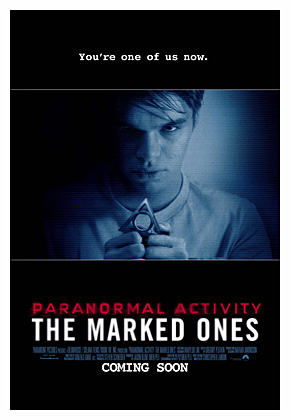 PARANORMAL ACTIVITY: THE MARKED ONES (2013)

The previous entry in this found footage franchise was widely panned as the weakest of the series, even by fans and while I didn’t think it was as bad as it was made out to be, it was still the lesser of the series and was showing a franchise in need of either fresh ideas and more daring directions, or a final chapter to wrap it up. The Marked Ones is definitely a good start back in the right direction and a spooky sign that these movies may not be done yet, if this is where things might be headed. Fans of this series will be happy to know that not only does this supposed “spin-off” get PA back on track but, is more reliant on actual scares than jump scares and answers a lot of questions that the other films have set up. It ties in perfectly with the previous entries and yet is it’s own flick.

The movie starts out with friends Jesse (Andrew Jacobs), Hector (Jorge Diaz) and Marisol (Gabrielle Walsh) who live in an urban neighborhood and have a downstairs neighbor Anna (Gloria Sandoval) who is said to be a witch. One night this ‘witch’ is murdered and Jesse and Hector…who are always filming things with a new camera…choose to sneak into her apartment and poke around. They find the woman’s journal and it does indeed seem to indicate this mysterious woman was into the black arts and was part of a witch coven seeking to build an army of demon possessed first born males. Jesse wakes up the next morning with a bite mark on his arm and things start to get weird and Jesse’s behavior starts to change with heightened aggression, strength and an almost supernatural ability to keep himself from harm. This causes Hector and Marisol to investigate further…which includes meeting with Ali Rey (Molly Ephraim) from Paranormal Activity 2…and they soon find that Jesse may have been marked by this coven since before birth to become the next soldier in this nightmarish army. Can they save him or will Jesse be damned like the others before him?

Writer/director Christopher Landon answers that question… and many more… with a truly ‘crap you pants’ finale following a fun and scare filled flick that is both familiar and fresh at the same time. He knows how to build scares and he does so slowly with a film that builds it’s momentum steadily till a really intense last act that leads up to one of the best horror movie endings in quite a while and a climax fans of this series will love from between the spaces of the fingers that are covering their eyes. Landon cleverly ties this flick in with the previous entries and we get references galore and revisit a few familiar settings as well. As for the return of any other familiar faces other then Ali, you’ll have to see it to find out.

The cast are really good here. Our three leads are very likable and supply some fun laughs early on, especially from Diaz’s lovable goof-ball Hector. Jacobs makes a solid leading man and we like Jesse and feel for him as it becomes obvious he is in deep supernatural trouble. The camaraderie between the three makes Hector and Marisol’s efforts to save him seem real and the risks they take believable…and messing with a demonic worshiping witch cult is risky, as we find out.

So, in conclusion, Christopher Landon has things back to form and even shows promise of more intense things to come. He makes good use of the found footage format which is far less obtrusive here then in the last flick and he has a nice visual style to add to the atmosphere. This is also the most violent entry in the series and one of the scariest since the first flick so, this film earns it’s R rating from more then just a few curse words and snapped necks. If nothing else, Landon gives his Latino themed entry in this series a really great ending that will stick with you for a while after leaving the theater, especially if you are a fan. Let’s hope they can keep this new momentum going with future entires. It may still not attract any new fans to the series, but should rejuvenate the interest of fans disappointed by PA4. Well done and a lot of scary fun!

7 thoughts on “REVIEW: PARANORMAL ACTIVITY: THE MARKED ONES (2013)”