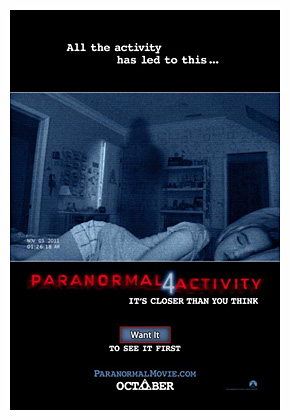 I know this sequel gets a lot of negative heat thrown it’s way but, as a fan of this series, I have to say I liked Paranormal Activity 4 to a degree. It’s the weakest entry in the series so far, and is low on scares but, I still had spooky fun with it and the last act delivered some goods. I think there still is enough of what fans like about this series to entertain but, next entry better start cranking things up and taking risks as this 4th chapter is showing some major signs of a franchise running out of steam. This entry opens up in 2011. A family in Nevada gets new neighbors across the street, a strange boy named Robbie (Brady Allen) and his single mom, Katie (Katie Featherston). When his mom is suddenly taken to the hospital, the family takes creepy Robbie in. Once he is settled into their home, teen Alex (Kathryn Newton) starts to notice strange occurrences as Robbie befriends her little brother, Wyatt (Aiden Lovecamp) and so, she and boyfriend Ben (Matt Shively) set up cameras and set the household laptops to record to get to the bottom of things that are going bump in the night…and bump in the day, too. Soon Alex begins to believe Robbie is not the only new occupant in the house and this spectral guest is far from a friendly ghost. The first act seems to be a bit choppy… though the director’s cut does flow better and adds a few fun bits… and there are a few odd edits throughout… such as one character being dragged out of their room and then suddenly on their feet, laptop in hand and apparently unharmed in the very next scene like it never happened… and it is also in act 1 in which the film has it’s strongest feeling of déjà vu but, things start to pick up steam during the middle act and the movie really starts to click and become more it’s own thing. Then the third act locks in and delivers the goods up to and including the spine-chilling climax. Sure, along the way there are some familiar elements but, you wouldn’t remove Jason’s hockey mask would you? There were enough new wrinkles in my book to keep things going, as well as, some subtle hints as to where the mythos might be headed. Not to mention a surprising reveal, too… although I admit it poses more questions then it answers. The cast are all fine. The parents (Alexondra Lee and her real-life husband actor Stephen Dunham who sadly passed away the month before this was released) get the least screen time and character development but, the teens are very likable, Newton and Shively work well together and give the flick a sort of Scooby Doo vibe, Newton especially is a strong heroine, Lovecamp’s Wyatt is sweet and Allen’s Robbie is very creepy. Series regular Katie Featherston gets a bigger role then last time around and without spoiling things, I liked how the character was used and Katie Featherston did a good job with her role. All in all there is some definite ‘been there done that’ and some wear and tear on the formula but, I think fans will enjoy this entry enough to want more and that’s what the filmmakers will have to deliver next time to keep this series going. It’s time to really take some chances and give us something to really bite our nails over. Paranormal Activity 4 is a nice snack to hold us over till then but, it’s time for Katie and company to give us a full meal of new frights and new surprises as PA4 admit-tingly does appear more like something put together just to keep us busy till they come up with something really solid. This series needs a second wind if it is to survive.

The infamous trailer which includes a lot of spooky scenes that didn’t make it into the final cut or directors cut… the film was edited up to the last minute before release and sadly some of these bits didn’t make the released print. Shame, because some of it looks better than the sequences we got and I personally think a lot of the negativity this flick gets is a product of the disappointment of not getting stuff that the trailers advertised…

5 thoughts on “HORROR YOU MIGHT HAVE MISSED: PARANORMAL ACTIVITY 4 (2012)”