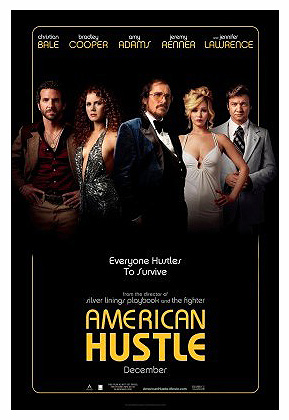 American Hustle is the new film from Silver Linings Playbook director David O. Russell that he co-wrote along with Eric Warren Singer based on Singer’s original screenplay. It uses the infamous ABSCAM sting operation of the late 70s as a basis for the fictional story of con-man extraordinaire Irving Rosenfeld (Christian Bale) and his lover/partner Sydney Prosser (Amy Adams) who have a fake loan operation set up where they charge customers, who are too risky for the banks, an un-refundable $5,000 fee to get them approved for loans that they never actually get approved for. Despite Irving’s unease, Sydney accepts a fee from Richard DiMaso (Bradley Cooper) who turns out to be an ambitious FBI agent. But, Dimaso is out for far larger prey and forces Irving and Sydney to set up a con to catch bigger criminals in order to earn Sydney’s freedom. The deal is to catch 4 criminals and they are free but, Irving cooks up a scheme to catch all 4 crooks at once and soon they are on the trail of the mayor of Camden, N.J. Carmine Polito (Jeremy Renner) and a bunch of US Congressman in a scam involving funding the rebuilding of Atlantic City as a gambling mecca with money from a fictional Arab Sheik (Michael Peña) and the bribes these men give/accept to set it in motion. But, Irving may have gotten himself in over his head as the more corrupt officials and criminals DiMaso thinks he can catch, the bigger the con gets and the more people it involves, such as Rosenfeld’s emotionally troubled wife Rosalyn (Jennifer Lawrence) and dangerous mob boss Victor Tellegio (a cameo I won’t spoil here). And the more people that get involved, the more relationships get entangled and the more complicated things get till the whole thing threatens to come down on Irving’s head. Like Silver Linings, Russell takes a serious toned story and fills it with a lot of sly humor and a large cast of eccentric, multi-layered characters… and despite the clever story, it is the characters that really charge this enormously entertaining and smart flick. He creates a large group of very real people who all have various reasons and motivations for doing what they do. Each character is manipulating others for their own purposes and Russell gives his great cast some really complex, colorful and yet very human characters for his actors to bring to life. And it is the life these actors bring under Russell’s guidance that elevates a really good movie to near brilliance. Christian Bale has given some simply great performances in his career ever since getting everyone’s attention at the age of 12 in Steven Spielberg’s Empire Of The Sun and he simply takes it to another level with his brilliant… and I don’t use that word often… performance as the con man who’s gotten involved in a con even he might not be able to pull off. Amy Adams is equally brilliant as Sydney, Irving’s lover and a woman who might even be better then he at the con game as she too gets caught up in the increasing size of the sting in order to keep herself out of prison. Jennifer Lawrence gives another Oscar worthy performance as Irving’s unbalanced and unpredictable wife who gets drawn into the con but, with her own agenda. Cooper once again shows some amazing growth as an actor and creates a portrait of a man ironically getting greedy when it comes with catching the greedy. His FBI agent is ambitious and relentless and his disregard for playing by the rules seems to increasingly blur the line between himself and those he’s trying to catch. Jeremy Renner finally gets a role worthy of the acting ability he showed in The Hurt Locker and The Town as Camden Mayor Polito, a man who truly believes he’s doing what’s best for the people even if it includes backdoor deals and payoffs. His sincere belief that he is doing what’s right and his genuine likability causes a confusion in Irving that could sabotage everything. And that’s another thing that elevates this film from being a routine thriller… and this flick is far from routine… is the complications that arise from the relationships that form between various members of the scenario such as Irving and Carmine, Richard and Sydney and Rosalyn and a mob enforcer. The game becomes so real and people get so involved in their roles that emotions flow and relationships form… or do they?… this is a con game after all. And that’s what makes this such an entertaining movie as you believe in the character relationships portrayed by the top notch cast and yet, you’re not completely sure if it’s not part of the game. And that is part of the fun. All I will tell you is that it’s a real treat to watch this great cast pull the wool over each other’s eyes, manipulate each other and you, the audience as well. And if all that doesn’t convince you, all the great 70s nostalgia and music, ads perfect atmosphere to the whole film. The music in particular is like another character and the songs placed perfectly. I can never hear Wings’ Live And Let Die again without thinking of Jennifer Lawrence. Altogether this is a wildly entertaining and intelligently written flick with a tour de force performance from it’s entire cast. Sure there are a few slow spots but, everything else is such a delight, one can forgive a few moments to catch their breath. A real treat especially if you are worn out by superheroes, Hobbits and over abundant CGI and are looking for some more substantial to enjoy with your popcorn. A blast from David O. Russell!

4 stars… doing some of their best work!