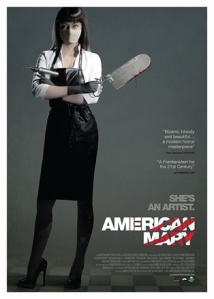 WARNING: If you haven’t seen American Mary, then be aware there are some MAJOR SPOILERS in this article…

I’ll start off by saying that I have been watching and loving movies for almost 5 decades and I certainly don’t consider myself any kind of expert and I am not going to sit here and tell you that I always ‘get’ what a filmmaker is trying to accomplish. But I have seen a lot of movies and will admit I am a bit cynical and hard to please at times, so when a movie comes along that either challenges me or makes me second guess myself, it isn’t often, but it is very refreshing. Which brings me to the Soska Sisters’ American Mary. American Mary is a horror thriller with a very intriguing story… down on her luck medical student Mary Mason (Katharine Isabelle) in an effort to pay her way through medical school gets involved, by a series of bizarre circumstances, in illegal body modification surgery. Worse still, she is drugged and raped by her arrogant professor and uses her surgical skills to exact a cruel and brutal revenge. Mary’s path in life goes from struggling medical student to underground body modification rock star to sadistic killer. Upon first watching the film, I was definitely intrigued by the Soskas’ original story and their focusing on a segment of society that is rarely glimpsed in film, those who use their very own bodies as canvases for surgically altered sculptures. But I had some issues and while some of those issues still stand, my biggest conundrum came with the character of Mary herself. 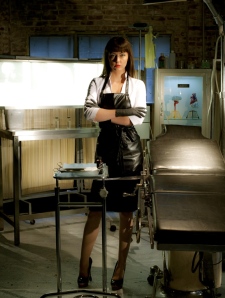 In my initial review I questioned how Mary was portrayed by both star Isabelle and the directors. First off, let me say that I am a big fan of this underrated and very hard working (since 7 or 8 years old) actress, so the fact that I was questioning whether she portrayed the character with a bit too much of an even tone or emotional detachment, already didn’t sit right with me. Obviously playing a character like Mary more over the top would have not worked well with the tone of the film, but I felt there should have a bit more of a difference between the Mary we meet and the person she becomes as the film takes her on this bizarre and dark path. She seems to adapt too easily to both becoming an illegal surgeon catering to the whims of this sect of society that alters their own bodies and then a sadistic killer when she is horribly wronged. I also questioned whether the Soskas properly portrayed the gradual changes in Mary as her path takes her from a medical student who calls her grandmother to check in on her, to a woman capable of some very vicious and cruel behavior. But it seemed odd that they would miss the point of their own character and story. So was it me who missed something? I have watched the film a few times since my initial view…actually watching it now as I write…and I still wasn’t quite getting the impact of Mary’s transformation. Then I considered something I hadn’t upon first watching it…what if Mary hadn’t changed? What if this wasn’t a story of s good girl turned bad or Jekyll and Hyde? What if Mary hadn’t transformed…but was freed? It would explain why Isabelle’s Mary really doesn’t show much of a personality change…except for a more confident air…as the film progresses and the Soskas’ don’t present us with any moments of dramatic alteration in her personally…this person was inside Mary all along and the events in her life did not create her, but unleashed her. Had I missed the point initially? Was I mistaken in expecting this to be a more traditional story? Now really needing an answer to my pondering…I turned to the Soskas. 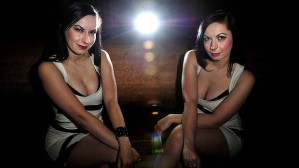 Thanks to the power of social media we can now actually talk with some of our favorite celebrities and filmmakers and was able to Tweet the Soskas… who just finished filming See No Evil 2  with Isabelle, Danielle Harris and WWE Superstar Kane… and asked them my question, “Was Mary changed by her experiences or did it awaken someone who was already there inside her?”…and the Soskas’ were gracious enough to give me an answer… “It was inside her always. There are situations in life that bring out our darker nature, that was hers.”… so, there it was. And watching the film now as I type this, their answer makes sense. Mary was lost and unhappy in her life as a broke medical student and becoming this diva of underground surgical procedures gave her the purpose and direction her life needed. This also gave her the tools to fight back and get revenge for her brutal violation by her Professor. Her validation from her new life gives her the strength to get back at a man who took advantage of her…and who knows how many other girls…sadly, this does push Mary into a very dark place and awakens her ability to use her skills to be very sadistic, cruel and commit murder. Was Mary mirroring her patients and only becoming her true self after some drastic and unconventional alterations to her life as they to their bodies? I now think this could be. You might even consider that altering the physical form of her patients gave her a bit of a God complex and she now felt punishment and death was hers to give out. It does parallel Grant and his fellow surgeons view that others were theirs to act out their perverted desires on, whenever they chose and without consequence. Though, oddly enough, I do think Mary had somewhat more of a moral center, if not a very skewed one. After all Grant and his cronies victimized innocents while she killed for revenge and, in the one case, panic/self defense. Despite her treatment of Dr. Grant…and the unfortunate security guard…Mary does seem to have moments where she appears a bit remorseful or seems to be questioning herself, but we may never know where she was going to finally end up as Mary’s darker deeds don’t go unpunished and karma catches up with her in an ironic and bloody way. Not a traditional story or character, so it now makes sense not to view it with tradition expectations.

So there it is. I feel a lot more satisfied with the film now that the Soskas confirmed my suspicions and I gotta give them credit with giving this grizzled movie geek something to think about and chew on with their flick. And it’s been a long time since a movie did that. I still feel the film has it’s flaws. Some of the subplots and character relationships could have been better explored and the end seems to come out of almost nowhere. But this is an intriguing and original horror thriller and gives us a lead character who isn’t your typical heroine and is actually still likable despite her sadistic and homicidal sides. I appreciate this film making me second guess myself and intriguing me and presenting me with a character that wasn’t black and white and took me a few viewings to figure out…if I truly have. While I’m going to leave my original review here on the site as it is, as some of the points within are still valid, but I am going to now link it here, so readers can see how my perception of this flick and it’s lead character have changed. And again, if a movie can challenge me like this one did, it makes me want to keep an eye on this creative duo even more. Thank you very much to the Soskas for answering my question and keep messing with my head ladies, I think I like it!

You can also take a look here for our Halloween season look at Katharine Isabelle’s contributions to the horror film genre which also links to our reviews of  Ginger Snaps and it’s follow-ups!

3 thoughts on “THERE’S SOMETHING ABOUT AMERICAN MARY”