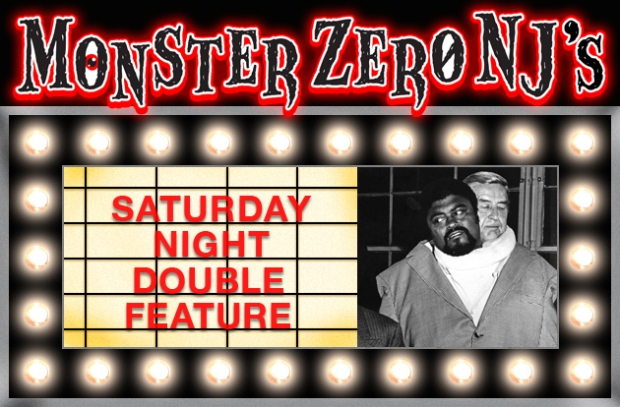 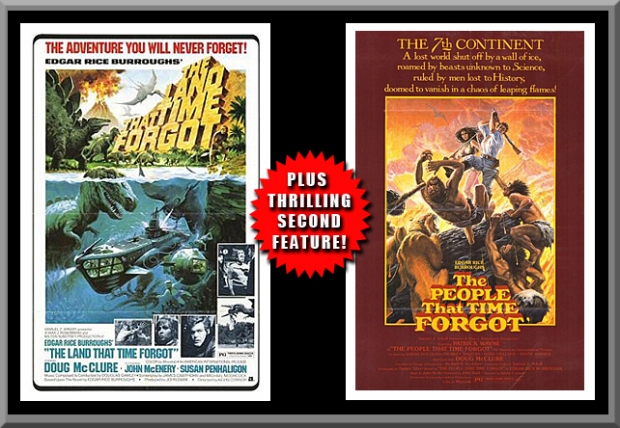 When I was a kid these rubber monster flicks were favorites and when I watch them today they bring back a lot of memories and are filled with fun nostalgia!… 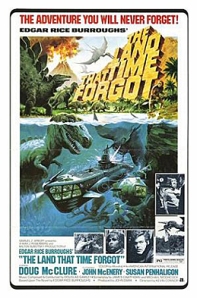 The Land That Time Forgot is a beloved childhood favorite of mine. It’s a cheezy but fun prehistoric lost world pic based on a great story by the legendary Edgar Rice Burroughs. Survivors of a ship sunk by a German U-boat in WWI take over that same sub, but due to sabotage, sub and crew become lost at sea. They find themselves in the Antarctic and an underwater channel leads them to a hidden prehistoric lost world where they now must fight together to survive against giant carnivores of all shapes and sizes and tribes of savage cave people.

Land can be thoroughly enjoyed now as a camp classic from the pre-Jurrasic Park days when dinosaurs were rubber puppets and every movie ended with an erupting volcano. Kevin Connor directs with just the right blend of seriousness and old fashioned charm and the cast, including Doug McClure as Bowen Tyler and the adorable Susan Penhaligon as Lisa Clayton, play their roles straight enough to get us to follow along despite all the table top models and rubber beasties. The SPFX may be cheesy as can be, but the flick has it’s heart in the right place. A very fun flick and a great Saturday night viewing with some of your favorite brews and buds. A rubber monster blast and a lot of cheesy fun! The type of flick they just don’t make anymore!

Personal Note: Saw this with my parents at the now long gone Park Lane Theater in Palisades Park, N.J. where I also saw classics like The Towering Infern, Poseidon Adventure and Jaws. So this flick holds a lot of nostalgic memories for me! 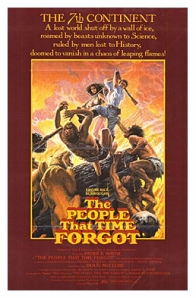 Sequel to Land That Time Forgot is also based on an Edgar Rice Burroughs story and is a bit less cheesy as it focuses on the primitive tribes more than the dinosaurs, but is also slightly less fun because of it. Still there is enough to entertain such as  busty cavewoman Dana (Dana Gillespie), who always looks like she just stepped out of a salon and the incomparable Shane Rimmer as a crusty pilot with a grudge against pterodactyls. Flick has Major Ben McBride (Patrick Wayne), a friend of Bowen Tyler (Doug McClure), launching an expedition to the lost world of Caprona after Tyler’s journal is found floating in the sea. Along for the ride is a spunky reporter (Sarah Douglas from Superman 2) who provides McBride with a nuisance/love interest as they search the prehistoric land for his long lost friend. They encounter the usual rubber monsters and Caprona’s ruling tribe, a vicious blend of caveman and samurai.

Kevin Connor once again directs, but doesn’t bring as much fun to this one as he did Land That Time Forgot and At The Earth’s Core. An amusing romp nonetheless and is loaded with nostalgia and charm. Did I mention there’s an erupting volcano? Not as enjoyable as the first flick, but still good fun and another old fashioned action adventure made with a lot of heart! Sadly this flick didn’t open near me and I had to catch up to it when it aired on TV.