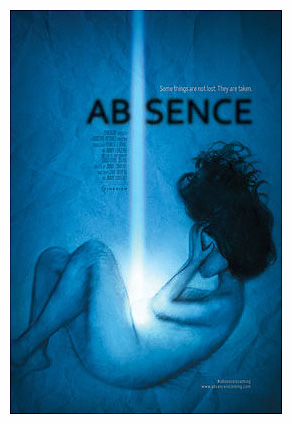 Interesting though not completely successful found footage flick tells the story of a young woman, Liz (Erin Way) who wakes up one morning to find she is no longer 7 months pregnant. After an extensive police investigation, Liz, husband Rick (Eric Matheny) and her film student brother, Evan (Ryan Smale) decide to take a restful vacation away from it all in their Aunt’s remote mountain cabin. Eric is also filming a documentary about his sister’s traumatic event for a school project and it is his footage that we are watching. As he starts documenting their vacation and conducting interviews about Liz’s mysterious loss, some strange things begin to occur at the cabin such as sudden power outages, strange lights in the sky and glimpses of mysterious figures lurking about while they sleep. Is the cause of the disappearance of Liz’s unborn child starting to reveal itself and is it not done with her yet? Flick has an interesting premise and a few nice spooky bits but, is held back by some flaws. First off, it takes a very long time for something spooky to happen and then after what doesn’t really seem that long, the film ends quite abruptly. Another few scenes like the effective ones it has, would have definitely given this flick more impact and not made it’s climax seem so rushed. Also, the character of Evan is very annoying at times and his obnoxious sarcasm really starts to grate on you and you wonder why ex-soldier Rick hasn’t knocked him out yet. It’s distracting at times. There are also a few too many questions left at the end… and I do appreciate that this story needs an ominous ending to work but, it would have been nice, and maybe added some effectiveness, if we knew, foe example, why the local girl Evan befriends, Megan (Stephanie Scholz) seems to know something about what’s going on and is very afraid of it. Is this remote mountain town and the siblings’ Aunt’s house somehow tied in? In some ways the found footage format does limit the full development of the story and it does have an interesting story. Overall, I did like Absence. The cast are fine and it has some nice effective scenes and I did like how we catch some startling events on camera yet, the characters seem foggy, headache plagued and forgetful about them in the next morning footage like something is manipulating them but, it could have been a lot more then just an interesting but, not quite fully realized, horror tale. Co-writer and director Jimmy Loweree has some potential as this was an interesting story and with some effective scenes, just a bit underdeveloped and only time will tell if that potential is realized.