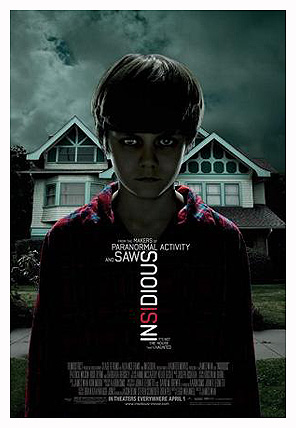 Having just seen The Conjuring, I thought I’d take a look back at James Wan’s Insidious and find the reviews are very similar…

Insidious is a fun, spooky and sometimes intensely scary flick, but does it live up to the internet hype that preceded it’s release? Not quite. The first hour of Insidious does deliver the goods. It’s basically non-stop scares and chills as early word promised, but it’s in it’s final act when it loses it’s grip somewhat.

Insidious tells the familiar story of a husband and wife (Patrick Wilson and Rose Byrne) moving into a house with their children and strange things start to occur. Soon their one son, Dalton (Ty Simpkins) is in a coma and moving away does nothing to stop the appearance of specters and strange sights and sounds. When they bring in paranormal investigator, Elise (Lin Shaye) she tells them, to their horror, that their son has the ability to leave his body in his sleep and has lost his way back. Now a vicious demonic entity has their son and wants his soulless body to use as a vessel to enter the world of the living. Can they fend off this dark spirit and save their child?

Once Director James Wan brings in the paranormal investigators and they start to explain things, the film takes a bit of a change in direction and things get a bit hokey. What follows is still spooky and there still are some good scares, but nothing close to the first hour. The design of what we see is creepy and Wan’s directing skills don’t falter, but the problem is we see things that are better left to the imagination as our minds can imagine far worse then anything Wan can present us. Some of the before mentioned explanations sound silly and hinder the atmosphere Wan has worked hard to set up and seeing his spooks, specters and demon out in the open and in plain sight, does not help it either. Things were far more effective when left in shadow, in glimpses and with a little mystery. The cast are fine though Wilson is a bit bland and Leigh Whannell and Angus Sampson are a little too goofy as Elise’s fellow paranormal investigators.

All in all, Insidious is far better than some of the endless sequels and remakes that pass as horror flicks today, but it’s not a classic by any stretch. Much like an amusement park ride, it’s fun while your on it, but after it’s over the effect fades quickly.