Despite believing a movie should be judged based on it’s own merit and not by any gimmicks attached to it, I have always been amused and fascinated by all the gimmicks that have been used to sell movie tickets over the years. One of these gimmicks that I was able to experience personally and more than once, was called Sensurround. Sensurround was a cheesy gimmick used briefly in the mid to late 70s by Universal Pictures to accompany certain releases to add to the theater experience and give a sense of realism to those event movies. It was basically two huge amps set up in the back of theaters which would amplify the bass in certain scenes making the theater literally rumble and shake during the appropriate moments to match what was happening on the screen and make you feel more like you were there. And as a dumb kid in the 70s, I fell for it and saw all of them!… in my defense, the process did get an Academy Award so, I wasn’t the only one…

The first film to use this gimmick and the film for which it was created for was Earthquake in 1974. Earthquake followed the 70s disaster movie format perfectly by having an all-star cast, lead by Charlton Heston along with the likes of Ava Gardner, George Kennedy and Lorne Greene, with soap opera level melodramatic storylines going on between the large cast of characters, till the massive disaster struck forcing them to into a fight for survival. In this case a massive earthquake hitting L.A. and when it did, the whole theater shook. The SPFX are pretty good for the time and the flick is good cheesy 70s fun, but not quite as good as the best of those flicks like Towering Inferno and The Poseidon Adventure. When Earthquake premiered on TV, certain radio stations broadcasted the audio to be played while watching the movie to simulate the Sensurround effect. The first and best use of the short lived gimmick. 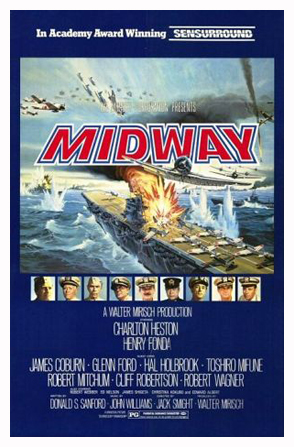 The second movie to be released in Sensurround was the all-star casted 1976 war drama Midway. Again, a who’s who of stars, including Charlton Heston, Henry Fonda, James Coburn and Toshiro Mifune, were brought together in a re-telling of the Battle of Midway where a hopelessly out-numbered American Navy (what was left after Pearl Harbor) handed the Japanese fleet their first major defeat of WWII. Most of the battle footage was stock footage from earlier films or actual colorized war footage spliced in between the new footage of the cast. The film was a bit long winded and filled with the usual melodrama for films of this era, but wasn’t bad overall and made decent use of the Sensurround sound system during the battle sequences.

The third film to use the Sensurround process was an odd choice. 1977’s Rollercoaster, despite being marketed like a disaster film, wasn’t an action flick, but a suspense thriller about a mad bomber (Timothy Bottoms) who is targeting roller coasters and is being hunted by an amusement park ride inspector (George Segal) who is doing a far better job at it than the F.B.I. It’s actually a fairly entertaining and suspenseful thriller, but one has to question the need to use this gimmick here other then Universal not having enough faith in the film to release it on it’s own. Good flick, but weak use of the gimmick as it only functions to enhance a few scenes featuring roller coasters and the bombers handiwork.

The fourth and final film to use the Sensurround gimmick is the 1979 Battlestar Galactica. A bit more appropriate choice of application then Rollercoaster, but still not as good as in Earthquake. Basically all Universal did was re-edit the three hour pilot that was aired on US TV and release it in theaters and attach the Sensurround gimmick to it. This theatrical version was released in ’78 as a movie in Canada and Europe, where they were not getting the TV show, but then Universal released it in Sensurround in the states in May 1979, to try to recoup it’s expensive cost as the show tanked and was canceled. The only differences are, it moves quicker then the bloated 3 hour TV episode and the villainous traitor Baltar is executed by the Cylons instead of given his own ship like in the show. As a use of Sensurround it was on par with Midway to enhance the battle sequences and the ship hurtling through space.

While it was never made, when Paramount and Universal were both preparing their own remakes of King Kong at the same time in the mid 70s, the plan was for Universal’s The Legend Of King Kong to be released in Sensurround as well. Paramount won the battle, apparently with some cash going Universal’s way, but the audience lost the war as their remake is notoriously terrible and they had the audacity to make an even worse sequel, King Kong Lives, 10 years later. But hearing King Kong roar and beat his chest in Sensurround might have been cheesy fun! We’ll never know as Sensurround disappeared and Dolby Sound had arrived with Star Wars and seemed to accomplish the same thing.

One thought on “RANDOM NONSENSE: SENSURROUND!”