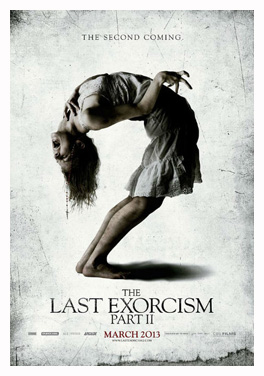 If you haven’t seen part 1 and intend to, you may find some of the details here as spoiler material for the first installment…

Sequel to the creepy and effective found footage flick The Last Exorcism starts out promising enough with a spooky sequence of a young couple confronting an intruder in their home that turns out to be Nell Sweetzer (Ashley Bell) from part 1. Nell is taken to a hospital and then without much investigation into what actually happened in the woods that night, she’s released to an all girls boarding house. Things seem to be going fine for young Nell, new friends, new job, the interest of a nice boy. But, before you can say “Linda Blair” Nell starts seeing and hearing things indicating the demonic presence that possessed and impregnated her last time is seeking her out for a second date. Now Nell must once again face this dark force that plagued her once before, leading up to yet another last exorcism. Sequel not only abandons the found footage format that made it a bit unique last time but, instead embraces every tired exorcism cliche’ it can. Flies, shadow figures, levitation, kamikaze black bird attacks, ominous prophecies… they are all there and presented in mundane fashion. Film is directed by Ed Glass-Donnelly who co-wrote the weak script with Damien Chazelle  and he adds little or no life to the proceedings as the subject matter is so tired and routine and orchestrated in such a by-the-numbers fashion that it has almost no effectiveness. The addition of a voodoo sect trying to protect Nell and thwart the demon’s efforts just comes across as silly and not innovative as it must have been intended. Not to mention that Nell already had the entity’s child in part one and was allowed to escape apparently, so, it’s a little confusing that this evil being suddenly is ‘hell bent’ on possessing her again. Why not just keep her under control all along? Add to that a downright silly conclusion that is borderline laughable and you’ve got a sub-par sequel that has none of what made the original such a spooky treat. Ashley Bell does give another good performance but, her efforts are sunk by the poor script and pedestrian direction and the rest of the cast are wooden and their characters forgettable. Cash grab sequel that’s not worth it unless you feel you must.