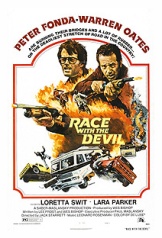 One of my favorite 70s B-movies. Race is now loaded with nostalgic charm, as well as, being an entertaining and sometimes spooky movie in it’s own right. Story of two couples on an RV road trip vacation crossing paths with a sinister cult and witnessing a human sacrifice is campy to be sure, but there are some creepy scenes and the are a number of good chase/action scenes as well. As the couple try to get out of town while being pursued by what appears to be everybody, director/actor Jack Starrett does a good job of creating tension as everyone seems suspicious and no one appears trustworthy. True, the cult’s actual subject of worship is unclear as our antagonists’ research drags up everything from witchcraft to Mayan sacrificial ceremonies and the cult creates far more attention and far more evidence of their existence by pursuing the RV cross country leaving a wake of death and destruction behind. But if they had just cleaned up their tracks and left no evidence to support the couples’ claims, we wouldn’t have anything to entertain us for the next 90 minutes. The acting is surprisingly good and the cast, including Peter Fonda, Warren Oates and Loretta Switt, and crew wisely take the proceedings seriously and let the audience have all the fun with it. A 70s gem that is still fun today. 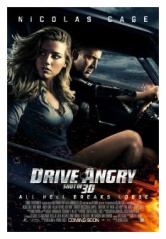 Drive Angry is another homage to the “Grindhouse” style movies of the 60s and 70s and for fans of this type of flick, it is an action packed, bloody good time. Nicholas Cage stars as a man who literally escapes from hell to avenge his daughter’s murder and granddaughter’s kidnapping by a Satanic cult and it’s Jim Jones like leader. Along for the ride, in a powerhouse turn, is Amber Heard as a tough as nails and hot as hell waitress who gets drawn into Cage’s quest. Heard is a true star in the making. She simply smolders on screen and you have no problem believing she can kick your ass. The bad guys are pretty generic except for a great performance by William Fichtner as the mysterious “Accountant” and it was awesome to see genre favorite Tom Atkins on screen again as a redneck sheriff. My only quibble is that the pacing was a bit off, but the films it honors were made before the Michael Bays took over, so they weren’t as breakneck paced as today’s action flicks. But Angry more then makes up for it with bullets, boobs and blood and on that note, delivers the goods. And if you’re a car freak, there are plenty of vintage muscle cars to salivate over if Ms. Heard is not distracting enough. A fun, trashy action/horror.