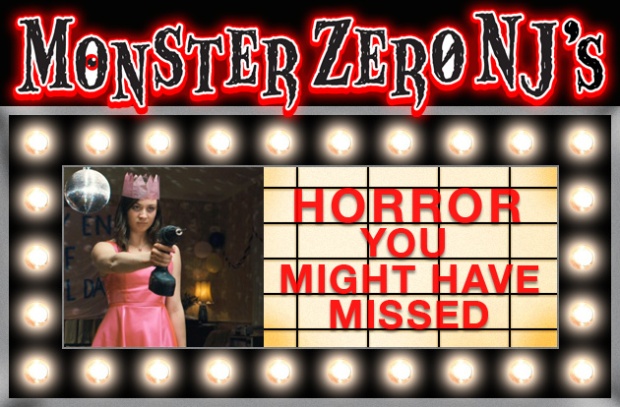 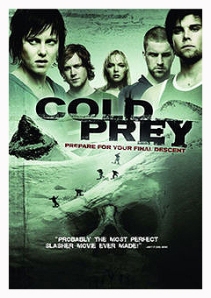 Cold Prey is an entertaining slasher from Norway that doesn’t bring anything new to the genre, but utilizes the traditional elements well and provides sufficient suspense and blood letting. Film opens with a montage of missing persons reports that inform us that over 100 skiers have gone missing in the mountains of Norway and despite this, thousands of people still invade the mountains yearly to ski. Cold Prey focuses on 5 friends who go on a snowboarding trip and when one of the bunch breaks their leg as night is closing in, they are forced to take shelter in an abandoned hotel. Soon they find that this hotel has a dark history. The young son of the owners disappeared and then, sometime after, the owners themselves were killed and the place has been shut down for over 30 years. A room full of people’s personal belongings proves the place has not been totally abandoned and soon, one by one, a masked killer is stalking them with his trusty pick axe. Can spunky strong willed heroine Jannicke (Ingrid Bolsø Berdal) and her friends survive?

Director Roar Uthaug directs this horror competently. He knows how to build suspense and and provide some effective kills. The script by Thomas Moldestad also provides us with some likable characters to fear for and a plucky heroine to root for. The cast are fine with leading lady Berdal standing out as the “Jaime Lee Curtis” of the flick and it’s fun to watch her try to elude and battle this masked maniac. The killer himself is no Michael Myers, but is effective enough to evoke chills. Not a classic, but solid enough slasher fun. 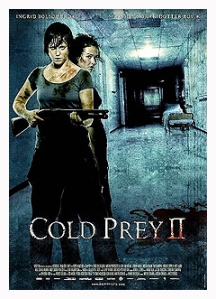 CAUTION: If you are interested in checking out  Cold Prey, you may not want to read the details of the Cold Prey 2 plot.

Well made sequel opens shortly after the first film with Jannicke (Ingrid Bolsø Berdal) being found wandering in shock in the middle of the road and soon a rescue team finds the killer’s body and his cache of corpses in a glacier fisher. The film then pulls a Halloween 2 (1981) and has sole survivor, Jannicke being stalked through the nearly deserted halls of a soon to close hospital by the killer, who’s been revived by the hospital staff. Of course he brutally kills everyone in his path, while trying to hunt her down along with pretty young nurse, Camilla (Marthe Snorresdotter Rovik).

Despite it’s similarities to the Halloween sequel, director Mats Stenberg still manages some nice suspense and chills and gives us some likable characters to root and be afraid for, as well as, not one but two feisty heroines who are not about to let this masked psycho finish the job easily. He does a good job matching the style and tone of Roar Uthaug’s first flick, while upping the kill quota, so, they fit together nicely and would make a good double feature of Norwegian slasher entertainment. There is a Cold Prey 3, which is a semi-prequel, but nothing I have heard about it makes me want to bother tracking it down.