I’ve decided to make my first post a look back at a trilogy of 80s Roger Corman sci-fi classics that are among my favorite guilty pleasures from that era, Battle Beyond The Stars, Galaxy Of Terror and Forbidden World… 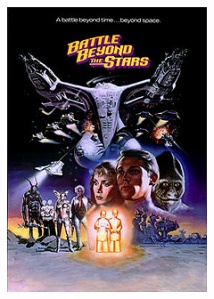 Battle Beyond The Stars was legendary producer Roger Corman’s answer to Star Wars but, it’s actually a remake of Seven Samurai set in space, even naming the home planet “Akir” after director Akira Kurosawa. This cult classic is silly, cheesy and the pacing is a bit off but, it has something Lucas’ later prequels didn’t have…heart. Battle is a little movie that tries hard and at the same time is having fun doing it and viewed with the right frame of mind… and right type of beverage… Battle can be a lot of fun as it tells the story of a heroic young man (Richard Thomas) who desperately tries to gather a group of mercenary fighters to defend his peaceful planet from attack by the evil conquerer, Sador (John Saxon). Corman assembled an interesting cast for his biggest production, Walton’s star Thomas, veteran actors George Peppard and Robert Vaughn and genre favorite  Saxon, as well as, the buxom Sybil Danning. Art direction and production design on Battle was by a then unknown James Cameron. And the music score was by now mega composer, James Horner. Corman has introduced countless talents behind and in front of the camera through his low budget classics and Battle Beyond The Stars is no different. Fun as only Roger Corman could present and the type of film that they don’t make any more. Another film I was fortunate enough to see at the legendary Oritani theater in Hackensack.
EXTRA TRIVIA… can you spot future Star Trek:TNG star Brent Spiner in a small role?

This sci-fi horror from Roger Corman has it’s problems but, for the most part, is a well made and effective film that actually stands on it’s own despite being inspired by the success of Alien. There is some clunky dialog and choppy editing but, there is also spooky and tense atmosphere throughout and some good creature effects and gore. The film has garnered a reputation over the years based on the ‘giant worm rape scene’ but, it really is a good little sci-fi/horror that has plenty to offer aside from that quintessential Corman moment. The flick follows a rescue mission to the dark and mysterious planet Morganthus, a planet of horrors that holds a dark secret. The eclectic crew of the Quest must try and survive the mission and each other, as unknown forces seem intent on their demise. The cast is effective and includes Edward Albert, future Freddy Kruger Robert England, Happy Days’ Erin Moran and genre favorite Sid Haig. James Cameron of Avatar fame was the production designer on the film, as well as, the second unit director and the set decorator was future actor, Bill Paxton. As usual, another Corman production featuring talent who would go on to fame and recognition. His films were the start of countless careers. A personal B-movie favorite. You can just see the similarities in production design with Cameron’s classic Aliens.

You have to be a fan of low budget B movies to appreciate this sci-fi/ horror from Roger Corman’s New World pictures. If you are, sit back and enjoy all the cheezy SPFX, nudity, sex and gore this fun and strangely stylish Alien rip off has to offer. Let’s not forget the slimy, nasty space monster that’s the cause of all the bloodletting. And if that’s not enough, the nubile Playboy bunny scientists that are responsible for all the nudity. Forbidden World is filmed by director Allan Holzman with an almost psychedelic music video style as it tells the story of a soldier, Mike Colby (Jesse Vint) sent to an isolated research station on the remote planet Xarbia to deal with a genetic experiment that has gotten out of control. Colby not only has to battle a growing and hungry genetic mutant but, handle not one, but, two hot and very horny female scientists (Dawn Dunlap and June Chadwick). The type of B movie they just don’t make anymore. One of the last of it’s kind. Crack a few beers and enjoy!
EXTRA TRIVIA: Yes, you’re not imagining things, those are fast food containers lining the walls of the space station. Corman thriftiness strikes again…
…and this may be the only film is movie history where a cancerous tumor is used as a weapon. Only in a Roger Corman production, folks!